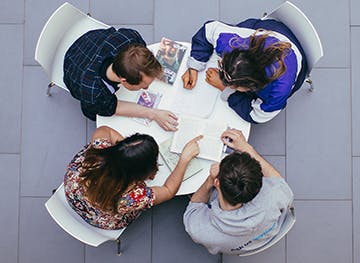 Based in Birmingham, the students and academic staff at the School of English are in the centre of what is fast-becoming one of the top creative and cultural cities in the UK.

By collaborating with the School of English you will open your business up to the new generation of innovative thinkers and writers. The School also has numerous academic researchers already working with businesses, building mutually beneficial relationships for growth and development.

The School of English has links with local and regional arts organisations, authors, poets, and many more leading professionals. Our staff and students have worked with:

Dr Islam Issa and students in the School of English worked with the Outreach Manager at Shakespeare Birthplace Trust (SBT) to create the “Shakespeare in South Asia Exhibition”. Six students worked to help curate the exhibition, which included researching stories, finding images and securing permissions. Some of them followed this up with the opportunity to talk to the media (e.g. radio interviews), and to write and record audio blogs for the SBT website. Students had a full, hands-on experience of what it is like to curate an exhibition, from conducting research to coming up with a narrative to phoning permission holders.

Dr Issa, whose exhibition on Muslims in WW1 received international and national recognition, also mentored the students in a number of areas such as curating techniques and writing for the public.

Dr Serena Trowbridge is a Trustee of the BMI, and runs a Poetry Centre which is a collaborative project between the School of English and the BMI. Serena has also arranged work experience in the BMI Library for students.

Writing West Midlands (the Literature Development Agency for the region)

Dr Serena Trowbridge was awarded AHRC Cultural Engagement funding in 2016 to work on a project entitled ‘Reading Art’ with BMAG. This included a conference, a series of public talks, a children’s storytelling event and a website; students were involved in all of these.

The Library of Birmingham

In 2015 Dr Serena Trowbridge worked with the Library of Birmingham and staff and students across the Faculty of Arts, Design and Media to set up a Gothic exhibition and one-day conference.

Work is underway on a project with Birmingham and Solihull Mental Health Foundation Trust organised by Dr Serena Trowbridge, researching the history of the Trust’s buildings and working on events, publications and promotion in conjunction with student volunteers.

Dr Islam Issa has an extensive media and public presence, having appeared on over 40 different TV and radio stations worldwide and given public lectures internationally, including for the Foreign Office. In 2017, he was also selected as a BBC New Generation Thinker for Radio 3 and BBC Four, making him one of "the ten academics whose research will be made into radio and television programmes for the BBC".