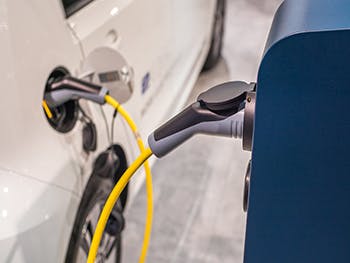 The report, based on research funded by the British Academy and produced and led by economist and regional automotive industries expert Professor Alex de Ruyter with colleagues from across the UK and Australia, assesses the capacity of supplier firms and perspectives of automotive workers in transitioning to manufacturing for Electric Vehicles (EV).

The research team received input from the late Jack Dromey, MP for Birmingham Erdington, who passed away in early January 2022.

Professor Alex de Ruyter said: “The current mania for Gigafactories in the UK obscures the fact that it is Vehicle Manufacturers (VMs) who will determine which aspects of electric vehicle production they will conduct in the UK, and where they will source the supplies of components from.

“We have already seen this evidenced by recent reports of discussions between Jaguar Land Rover (JLR) and Envision to potentially supply JLR with batteries - possibly made in the North East.”

Earlier this year, plans for a major electric car battery Gigafactory on the site of Coventry Airport received backing from local authorities, MPs, and the region’s metropolitan mayor Andy Street.

The proposed facility would make components for the UK’s car manufacturers, many of whom are pivoting to EV production in line with net-zero and carbon-reduction legislation introduced by the UK Government.

Current talk of establishing a Gigafactory in Coventry ignores the problems we have identified in securing as much value-added as possible in the West Midlands or the wider UK, as well as the need for an anchor client, i.e., a major vehicle company, for the Coventry site. Without concrete actions at a national and regional level (and timing is urgent), such talk is little more than hot air.

“If the production of cells is to take place at a UK Gigafactory, then this will in all likelihood need to be presaged by a UK Government ‘deal’ on a reduced tariff for electricity. This is because as much as 2/3 of the embedded energy consumed in the production of a battery is in the cell production phase and clearly the UK is currently grappling with uncompetitive energy prices.

“Helping the region’s existing supply chain firms to assess what they need to do re-orientate themselves towards the new EV or zero-carbon economy is essential.”

Enabling a just transition in automotive: evidence from the West Midlands and South Australia will be released at a launch event hosted at Birmingham City University on Friday 29 April 2022.