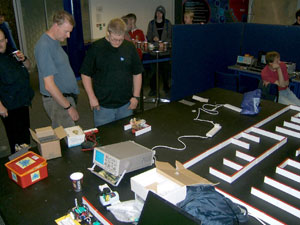 The inspiration for Micromouse began in 1972 when mechanical mice were built with springs for a racing contest, sponsored by the Machine Design magazine.

It wasn’t until 1977 that the idea of the Micromouse as a maze solving device was introduced by the IEE Spectrum Magazine, with Spectrum announcing an Amazing Micromouse Maze Contest would be held in June 1979 in New York.

6,000 entries were received, but only 15 micromice competed. The winner was Moonlight Flash, a dumb wall follower mouse.

In subsequent competitions the rules became more sophisticated, so competitors had a more difficult challenge in building more intelligent mice able to find the centre of the maze.