I spent over 20 years teaching and working in inner city primary schools in Birmingham and sometimes, I think, I managed to do some good. However, I eventually became frustrated with working in a system whose very underpinnings prevented children and adults learning in a way that would allow them to live fully. My engagement with critical pedagogy and the work of Freire, Shor, hooks, Giroux and McLaren and others has allowed me to find a way to voice and clarify my frustrations and tentatively begin to think of some possible ways forward.

In this blog I discuss how a structure for effective critical dialogue grounded in group work in a Key Stage One classroom could be constructed. To do this I want to try and synthesise some of the work of critical theorists, including Freire (1996), Shor (1992) and hooks (1994) and the work of those such as Barnes (1979), Mercer (2010; 2018) and Alexander (2020) working in the field of dialogic teaching.

We still live in a world where the children in our classrooms face orchestrated inequalities. Those inequalities are clear and apparent and are entwined within dominant givens (Shor, 1992; Hooks, 1994): that some will have less and others more; that if you work hard you will do well; that some knowledge is more ‘valid’ than others.  It is these prevailing norms and a plethora of others that we need to challenge and deconstruct, even with very young children if we are serious about a journey towards humanisation for all (Freire, 1996) or as Hooks (1994: 40) describes it, for us to ‘to live more fully in the world’.

Mercer (2010; 2018) has built on the work of Barnes (1979) in using ‘exploratory talk’ that allows children to be released from teacher dominated talk to engage with each other critically and constructively.  Barnes (1979) understood the complexities and inherent problems in a lot of classroom talk and advocated small group work as a way in which children could take a greater role in the formation of knowledge.  It is this use of group work that I want to look at more closely as a space in which young children can begin to take ownership of their learning and to begin to think critically.

Freire spoke of breaking ‘the vertical patterns characteristic of banking education’ (1996: 61) by using dialogue to break down the teacher/student relationship so that a new relationship emerges- that of teacher-student and student-teacher.  Similarly, Shor (1992) states that an empowering teacher does not talk at students but talks with them and Hooks (1994) talks of shifting power balances that are accepted as a means of creating productive and enabling learning contexts.  It is this challenging of accepted relationships and power structures that I believe to be an integral part of supporting and nurturing children in effective critical talk.

Nevertheless, students and especially young children can become unsure of a sudden shift in expectations and centres of control.  As Hooks (1994: 144) illustrates, ‘students get scared that you are not now the captain…but that you are after all just another crew member.’  To help with this Shor discusses his experience of working with college students and co-constructing ‘Rules for Speaking in Class’ (1992: 160) to support them in effective critical dialogue and Mercer (2010, 2018) has always strongly advocated the use of ‘groundrules’ that build on children’s own awareness of what makes good discussion.

Next, how could we begin to engage young children in critical thinking?  Firstly, we would need to define critical thinking carefully and clearly for ourselves whilst avoiding any vagaries or misconceptions.  As McLaren (1989: 161) points out, the term ‘critical thinking’ has been hijacked by neoconservatives and neoliberals and has been ‘neutralised…removing its political and cultural dimensions and laundering its analytic potency to mean ‘thinking skills.’   I would define critical thinking in line with Kretovic (1988: 51) who states that we should be providing students with, ‘the conceptual tools necessary to critique and engage with society along with its inequalities and injustices’.

Additionally, if children are to genuinely to feel valued in a democratic classroom, they need to see that the knowledge and culture that they bring is considered as valid as other knowledge within that setting.  As Apple (1999) notes the curriculum is not neutral knowledge but is the result of power struggles between different groups in society with quite often the more privileged sections winning out.  One first step to addressing this would be to challenge the notions of Standard English in our classrooms.  Cushing (2021) highlights parts of the National Curriculum (2014) where the use of Standard English is presented as inexorably linked to academic success.  The assumption being that non-standard forms can be equated to a lack of success in these areas and that children’s differing ‘linguistic repertoires are not suitable for classrooms’ (Cushing, 2020:  329).  Similarly, Shor (1992) exhorts us to imagine what it must be like to have the language of one’s community condemned as an inferior version and so part of my model for classroom talk would be to welcome the children’s different modes of speech, but also begin to critically discuss the implications of these different modes. 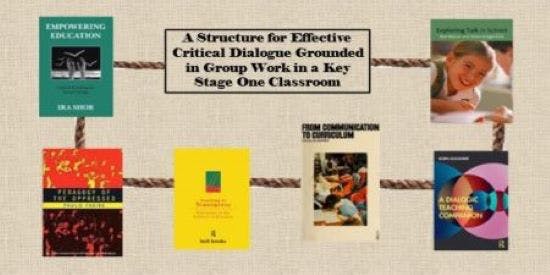 This framework of group work and talk would in and of itself be a liberating and democratic process.

As Shor (1992: 118) notes, we are socialised into ‘competitive self-reliance’ believing that we can only look to ourselves to survive in society.  This is directly reflected in primary education in how children are measured and assessed against their own individual efforts and more indirectly in current trends for ‘mindfulness’ and ‘grit and resilience’ (Duckworth, 2016) where children are asked to look inwards to stay mentally healthy and achieve instead of outwards for help and guidance.  Facilitating children to work in groups and enabling them to talk in ways that are effective gives them a living democratic space where they can experience the value of working co-operatively and for a common cause.

Lastly, it is important to recognise the inherent problems when proposing a framework based on critical theory to be used in the classroom. Darder (cited in Douglas and Nganga, 2013) states that critical pedagogy is contextual and cannot be reduced to recipes or methods.  There appears to be some reluctance to forward models for practical application in the classroom, perhaps in fear of creating static frameworks that cannot meet the needs of different and varying social and cultural settings or are even eventually co-opted into dominant norms that then go onto help sustain prevailing inequalities.  Integral to my framework then would be the use of critical reflection, such as Brookfield’s four lenses (Brookfield, 2017) enabling my practice to remain flexible and open to change.

When endeavouring to teach models that enable children to engage with each other democratically and to use critical thinking to question deeply the societies and cultures in which they live perhaps we should be pragmatic.  As Shor (1992) reminds us, one such classroom is not going to solely transform society.  Nevertheless, Shor (1992) goes onto to hope that an ever-widening spread of critical practices in the classroom will eventually seep outside of education and begin to seriously challenge unilateral authority and Freire (1996) reminds us that it was humanity who created the societies in which we live and so humanity can also transform that reality.  My final thoughts would be that if we love the children in our classrooms, we must try to enable them, if not to live yet in a free and equal society, then to be able to live consciously, lovingly, as free, and as equally as they are able within this one.

Cushing, I. (2020) Power, policing, and language policy mechanisms in schools: A response to Hudson. Language in society. 49 (3), pp 461–475.  Available at: https://librarysearch.bcu.ac.uk/discovery/fulldisplay?docid=cdi_crossref_primary_10_1017_S004740452000038X&context=PC&vid=44BCU_INST:44BCU_INST⟨=en&search_scope=MyInst_and_CI&adaptor=Primo%20Central&tab=Everything&query=any,contains,cushing%20policy%20mechanisms

Duckworth, A.  (2016) Grit: The Power of Passion and Perseverance.  New York: Scribners

Hooks, B.  (1994) Teaching to Transgress: Education as the Practice of Freedom.  Abingdon: Routledge

McLaren, P.  (1989) Life in Schools: An Introduction to Critical Pedagogy in the Foundations of Education.  New York: Longmans