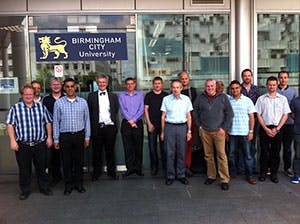 Birmingham City University’s Cisco Academy Training Centre is leading the way in computer industry training after global organisations including the BBC and one of the world’s foremost providers of consulting services Capgemini have signed up for courses at the University’s training centre.

With rapid growths of computer networks creating a worldwide shortage of people qualified to implement networking solutions, the need for organisations to have access to better training to successfully compete in the global economy has never been more important.

Providing training for network professionals across Europe and the Middle East and delivered by staff at the University’s School of Computing, Telecommunications and Networks, the short courses have been completed by BBC staff for addressing key networking issues that organisations have to deal with in such an effective way.

Andrew Jones, Principal Technologist at the BBC Academy Centre of Technology, said: “The training has been excellent for our staff. The course has helped BBC staff understand the issues of Internet Protocol and made them a lot more confident in dealing with our network suppliers.”

Computing courses at Birmingham City University have recently climbed 41 places in the Guardian’s University Guide for 2014, based on data collected by the National Student Survey and Higher Education Statistics Agency (HESA).

Duncan Maidens, Senior Academic and Cisco Academy Co-ordinator at Birmingham City University, said: “The Cisco Academy Program has given us the tools to develop leading edge courses for our graduates and postgraduates which lead to industry recognised qualifications as well as academic awards. This is the very combination employers are now looking for to ensure their recruits are ‘job ready’.

“Based on the success of some of our recent graduate placements, Capgemini have reached out to us to provide tailored courses for their current workforce. The link to the BBC came with Birmingham City University’s involvement in the BBC Technology Apprentice Scheme and our reputation in delivery of computer networking courses.

“With three regular courses in advanced networking now in the annual schedule we are looking at another two course titles to address the BBC’s needs. It’s a great opportunity to promote the University as a leading edge centre for teaching networking technology.”