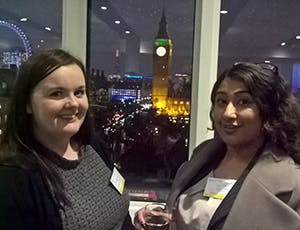 Last week over a dozen enthusiastic final-year Forensic Computing undergraduates gathered outside Millennium Point at 4.30am to take a coach down to London for the Cyber Security Summit 2016.

The students attended a range of activities at the summit, learning from cybercrime fighters responsible for the resilience of the UK public and private sectors.

They heard about the new National Cyber Security Strategy in a presentation by the Deputy National Security Adviser for Intelligence, Security & Resilience and attended breakout sessions including a seminar about a real-life digital forensics investigation.

The morning ended with a panel discussion that involved senior representatives of the National Crime Agency and Europol, alongside a reformed hacker who was first arrested at just 12 years old for breaking into thousands of systems across the UK, later serving a 15-month prison sentence.

Alongside the sessions, the students had plenty of time to visit the stands in their breaks, talking to company representatives and collecting freebies. Even though this wasn’t a recruitment event, a few of the students actually secured job interviews.

Daniel Owen, one of the students who attended said:

I really enjoyed the day, it was excellent and a few of us have got interviews already.

The afternoon plenary session was devoted to case studies from the energy sector, health sector and finance industry by the Head of Information Security at Centrica, the Chief Operating Officer of NHS Digital and the Vice President of Cyber Threat Intelligence at Barclays, respectively.

Mark Josephs, Professor of Computer Science, thanked Satvir Sahota (who teaches the students Computer Law and the Law of Evidence) for organising the trip and said he was, “proud of the professional way in which our students conducted themselves, networking with government and industry professionals, and actively participating in the question and answer sessions.”