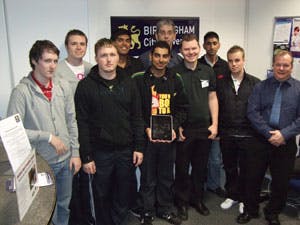 The University’s Faculty of Technology, Engineering and the Environment (TEE) is embedding software tools developed by the innovative company, The Games Creators (TGC), in its recently established BSc in Computer Games Technology. As a result, the Faculty invited TGC’s founders to share with staff and students insights to both their company’s approach and the future developments they see emerging within the world of computer games.

TGC is a network-based business with no HQ and just six full-time employees. Although it began in Lancashire, over ten years it has built-up an international network of key developers stretching from Bolton to Brazil which has helped it establish a reputation for leading-edge innovation in wide-ranging games creation. The business was established in 1999 by experienced programmer Lee Bamber. He was soon joined by financial director Rick Vanner, a former colleague and techno-enthusiast who shared his vision for a de-centralised, virtually-based business. They have developed an international network of programming, graphic, audio and musical talents to develop an exciting range of multiple gaming software tools and products.

Andrew Wilson, course director for Birmingham City University’s BSc in Computer Games Technology, has championed the introduction of TGC tools to his course curriculum. He says: “This move augments the University’s increasingly significant role in computer games development. The springboard to taking this step came from the significant knowledge developed within the well-established cross-University ‘Digital Games and Simulations’ special interest group.”

Based in the School of Computing, Telecommunications and Networks (CTN), this multi-faculty group has become a key focus, not only for students, but also for the staff who support numerous industrial sectors in advancing their use of computer technologies. Whilst computer gaming has become a significant ‘multi-billion dollar’ component of the international entertainment industry, other commercial and professional sectors are increasingly embracing what is known as ‘serious gaming.’ CTN’s Head, Mak Sharma , comments: “ Our School is helping support collaborations both between staff across the University, and with other West Midlands organisations. We’ve been able to demonstrate how computer game-based techniques can be beneficially applied in areas such as health, engineering, the military and business in general.”

With the prospect of TGC’s game engines stimulating CTN students’ grasp of key principles in games development, CEO Lee Bamber advises: “The key to our success has been that we always seek simplicity in ideas. Successful gaming depends on users having a good ‘game-play’ experience and transcends complex technological cleverness. This has helped us differentiate ourselves from the competition, whilst also appealing to all age groups.” He emphasised, however, that a good grounding in Maths and Physics was essential for successful programming and added: “Only then can good graphics really work!”

The company has successfully built-up a widespread community of both creators and users who can source from, or contribute to, its multi-faceted website. This offers nearly 3,500 gaming components, or complete games, dependent on the visitor’s level of interest. Financial Director, Rick Vanner, says: “We also offer a free monthly newsletter full of news, downloads, reviews, tutorials, competitions and interviews from TGC, as well as our partners and wider game-making community.”

TGC’s twin entrepreneurs told the University group the future in gaming lay in three directions. These were: providing ‘cloud computing’ based tools, the game-designer’s ability to utilise social media where appropriate, and game designs that cater for multiple devices and media platforms.