Pioneering car crash technology is not for dummies 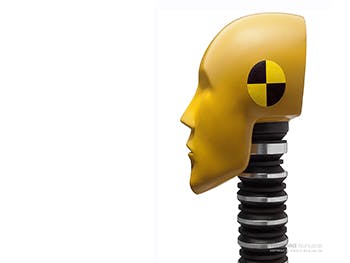 Pioneering Birmingham research which helped revolutionise vehicle safety has been named among the most important computer science developments of the last 20 years.

Studies carried out by the University of Central England (now Birmingham City University), which allow scientists to analyse car crashes just a fraction-of-a-second long, were hailed as the fifth most influential carried out by UK academics.

The accolade was announced by the UK Computing Research Committee, the Council of Professors and Heads of Computing and the BCS Academy of Computing which looked at the greatest computer science contributions by universities since 1990.

The system, which was first devised in the late 90s, uses a range of data such as video footage, stills and sensor information to create a detailed record of a crash and allows exact moments to be pinpointed and viewed from different angles.

The method has allowed safety experts and car manufacturers to dramatically cut the time spent analysing a crash from weeks to hours by removing the need to wade through dozens of documents, graphs and rolls of film.

Today the method remains central to the internationally recognised Standard for Crash Data Storage and Analysis.

It has also helped create new products used by rail and aeroplane safety bosses and has been used to study how train seats react to crashes and gauge how buildings, such as the Houses of Parliament, would respond to collisions.

He said: "Before our system, people would have to spend days looking through rolls of film, picking through data and drawing up graphs.

"Now they can do the analysis in a day or half a day, and have the time to make better design modifications.

"It proved very popular with the major manufacturers and within a few years everyone was bringing out imitation systems and today it is still being used by major organisations across the world.

Results were revealed in a list of the top 20 computer science innovations produced by UK universities based on research over the last 25 years. Entries needed to demonstrate a lasting global impact.

The original research was used to create two products; DataBuilder, which stores the information and DataViewer, which allows companies to use multimedia to analyse it.

The prototypes have since been adapted to create more advanced products including Vicasso which is used by top organisations from Jaguar Land Rover and General Motors to Duracell and the US Army.

The University is continuing the research and is looking at ways the system could be applied to the medical profession.

Professor Athwal added: "The system itself is very flexible. It was originally built with car crash testing in mind, but it has been useful for all sorts of engineering and scientific investigations where data and video are recorded together."