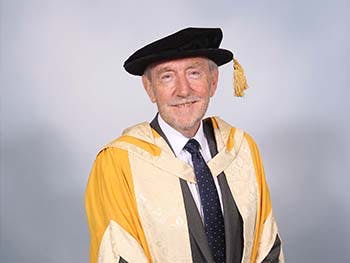 A leading figure in international motorsport has received an honorary doctorate from Birmingham City University in recognition of his 45-year career in the fast lane that has taken him from the competitive world of professional race driving to the heady heights of Formula 1.

Born in 1946 in Chiswick, Brian Sims began his career racing in Formula Ford and he competed against many young drivers who would become household names in Formula 1, including Derek Daly, Nigel Mansell and Derek Warwick. Despite achieving success as a Honda works driver in touring cars, Brian eventually retired to establish South Africa’s first ever professional racing driver school.

A move into Formula 1 followed, as Marketing Director of Lola Cars’ new Grand Prix team.  Whilst there, Brian identified an urgent need for the British motorsport industry to be formally recognised in its own right, as opposed to being an add-on to the UK motor industry. Importantly, he saw the need for introducing motorsport engineering and technical skills education at university level. 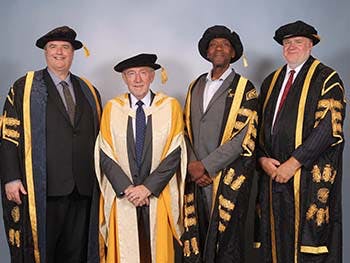 Brian’s award was conferred by the University’s Chancellor, Sir Lenny Henry on Friday 27 July in a graduation ceremony at Symphony Hall, Birmingham, alongside graduands from Birmingham City University’s Faculty of Computering, Engineering and the Built Enviornment.

My day at the Birmingham City University graduation ceremony was one that I’ll never forget. I always thought that honorary doctorates were awards bestowed on other people. It never entered my head that, one day, I might receive such an honour.

“It proved to be an inspirational occasion, as 650 students took to the stage to be presented with their awards. To say that I was nervous when it was my turn to address them would be an understatement! They had inspired me, now I had to try and do the same for them. No pressure there!”

Brian stood down in 1997 as the Motorsport Industry Association’s CEO to become Commercial Director of Benetton Formula 1. In recognition of his achievements, he was appointed an MIA Honorary Life Member. The author of two highly acclaimed books on sponsorship, Brian is a Guest Lecturer for the World Academy of Sport and an accomplished professional speaker.

Brian offered some words of guidance to the Birmingham City University graduands during the ceremony:

“My advice is to be flexible in terms of goal setting. Don’t be so rigid about the way you want to achieve your goals, that you miss them altogether. Remember, talent plus determination equals an unstoppable force.”

“I wish you all every success in achieving your goals, however you reach them.”

Brian his and wife Liz, live in Emsworth, Hampshire. He has just finshed his autobiography ‘You Don't have to be a Champion to be a a Winner’ which is due to be published later this year.