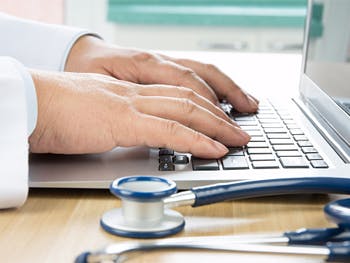 Digitising health records to include key patient and treatment information could help identify patterns of illness, effectiveness of treatments and how these patients’ gender and ethnicity influence this.

A study based on electronic healthcare records was carried out by Dr Yevgeniya Kovalchuk, Lecturer in Computer Science at Birmingham City University, alongside co-authors from King’s College London.

It showed that by analysing unstructured patient records researchers can turn mountains of routinely collected data into useful insights that can improve our understanding of mental health problems and the provision of healthcare services.

In particular, the researchers analysed 500,000 diagnoses recorded for a cohort of around 200,000 mental health patients between 2008 and 2015, and were able to identify a number of patterns in those who had sought mental health treatment, including:

Dr Yevgeniya Kovalchuk, Lecturer in Computer Science at Birmingham City University’s School of Computing and Digital Technology, said: “Opening up healthcare records for research has a number of benefits, including finding more effective treatments, establishing adverse drug reactions, highlighting opportunities for saving time and money for both patients and doctors.

Being able to draw out these kind of links could also have a real positive impact on how we diagnose and treat illnesses of all kinds.
Dr Yevgeniya Kovalchuk

“The technical, political, and ethical barriers often standing between researchers and the data such as confidentiality, unstructured nature of data and their heterogeneity - physical, structural, semantic - can be overcome.

“Security experts, software engineers and data scientists can work alongside clinicians and management to build secure pipelines providing researchers with de-identified, clean and structured data that can be re-used in numerous, potentially life-saving, studies.”

It is hoped the research will demonstrate how anonymous databases set up across the NHS could play a key role in helping researchers shape future medical treatments by providing data which can be easily analysed.

Traditionally research into medical conditions needs to be carried out using lengthy one-to-one interviews or large national databases, providing either detailed information on small numbers of people or few details for a large number of people.

However the new system would be able to automatically search for key information such as courses of treatment, side effects experienced or trigger factors and draw comparisons or identify links which could help improve how illnesses are understood and treated.

The findings of the research have been published in a report in the PLOS One journal.