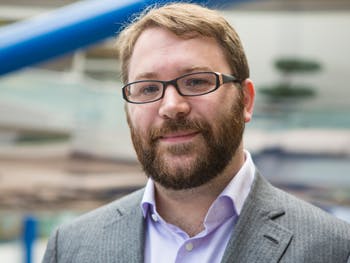 BCU graduate Cal Henderson is set to float his web-based messaging company on the New York Stock Exchange in a multi-billion-dollar deal.

Slack, which helps individuals at companies and organisations to communicate with each other, was recently valued at $13 billion (£10 billion), meaning Cal’s own stake could be worth $442 million (£338 million).

Cal studied on our BSc (Hons) Software Engineering course, graduating in 2002. He then worked for publishing giant Emap, before helping to create the image sharing site Flickr, which was sold to Yahoo! in 2005 for $25 million (£18 million).

In 2015, Cal was named as one of the University’s Alumni of the Year. On receiving the award, he said: “The speed of growth definitely surprised us. When we started building Slack, we never dreamed it would become such a vital tool for so many teams. It was the right product at the right time, with the right team behind it.

When I was a kid and thought I could one day work at Microsoft – it never occurred to me that I could build a company that might become the next Microsoft. Silicon Valley is a long way from Birmingham, and a university education opens up a world of possibilities.
Cal Henderson

His next big idea came about when he worked on a web-based game called Glitch, which ultimately didn’t work out, but the systems used by the developers to communicate with each other formed the basis for Slack.

Slack creates a single, organised and searchable archive of information pulled from email, messaging and popular services like Twitter, Dropbox and Google Drive.

When the platform launched in 2012, it immediately became popular with more than 8,000 teams signing up in the first 24 hours, and it is now used by over 600,000 organisations across 150 countries. Its ‘freemium’ model means that small firms can use it for free, while larger companies pay to access the platform.