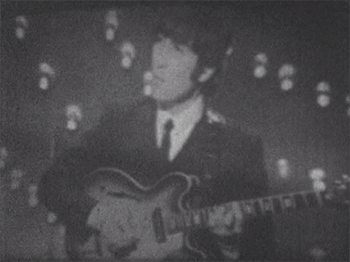 Long-lost performances of major international artists including The Beatles, Dusty Springfield, Tom Jones and The Hollies will be shown for the first time in more than 50 years at Birmingham City University on Saturday 1 June.

Book tickets to the screening

The clips feature Top of the Pops performances from 1966, and will be revealed to an audience at a special day-long public event following the discovery by TV experts Kaleidoscope.

The footage was believed to have been lost forever, until David Chandler, a music enthusiast, contacted Kaleidoscope after seeing recent publicity on BBC television about another Beatles discovery.

In April 2018 the BFI and Kaleidoscope launched a campaign to find the Top 100 Lost TV shows. Number 2 on that list was Top of the Pops. More than 200 lost performances were donated on videotape by one collector, and then David Chandler handed a series of 8mm film reels to Kaleidoscope, which specialises in finding ‘lost’ video and TV shows, previously believed to have been wiped from archives and deleted forever.

Kaleidoscope’s experts digitally remastered the footage and enhanced the sound to revitalise the on-stage performances, which includes major hits including Birmingham’s Spencer Davis Group, as well The Troggs and the Small Faces.

The special screening will feature talks from professionals including Ayshea Brough, host of Granada Television’s Lift Off, and will showcase the unseen performances to an audience of industry experts as well as TV and music enthusiasts. Footage to be shown at the event includes a 92 seconds Top of the Pops appearance of The Beatles performing Paperback Writer live from June 1966 – only eleven seconds was believed to exist beforehand.

Birmingham City University alumnus and Kaleidoscope CEO Chris Perry said: “Kaleidoscope thought finding 11 seconds of Paperback Writer was incredible, but to then be donated 92 seconds – and nine minutes of other 1966 Top of the Pops footage was phenomenal.”

Among the clips to be screened will be:

Kaleidoscope launched its hunt for the UK’s top 100 ‘lost’ TV shows in April 2018 and has already had dozens of members of the public come forward with video tapes containing shows ranging from Lift Off to Do Not Adjust Your Set.

Top of the Pops was ranked number two on the list of the most valuable finds – behind Doctor Who – with the new collection of clips filling in some major gaps in archive history.

The screening will be held at Birmingham City University’s Parkside Building between 10am and 6pm on Saturday 1 June.

Robert McLaughlin from Birmingham City University’s Centre for Digital Media Technology said, “Top of the Pops was a major part of the UK’s cultural heritage, led the television industries through a number of ground-breaking initiatives, and was an institution that helped shape the careers, aspirations and dreams of musicians across the globe. We’re proud to enjoy the benefits of great working relationships with industry professionals such as Chris Perry and his team at Kaleidoscope.

The screening event will provide the perfect event at which to celebrate the dedication, commitment and enthusiasm of all involved in unearthing and restoring this exceptional footage.
Robert McLaughlin

Tickets for the event can be booked via http://bit.ly/parksideplayspop