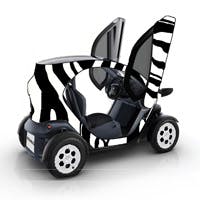 Three talented Birmingham City University students are one step closer to winning their University tuition fees paid for a year, having been nominated as finalists in a competition to create a design for Renault’s new electric car.

The unique style of the two-seater Twizy captured creative imaginations across the country, but the expert panel of judges - including renowned motoring journalist Quentin Wilson - selected Psychology student Lauren Milton-McNally, Marketing, Advertising and PR student Joe Murfin and Art and Design student Luca Bresolin as having three of the most creative designs.

19 year old Kings Heath student Lauren based her entry on monochromatic zebra-inspired prints. She explained: “I chose my design because zebras are and have been my favourite animal since I was little and I have wanted to ride one since I was about four. A zebra themed car is the closest I could get!”

As they reviewed the entries to curate their top ten designs, the judging panel were overwhelmed by the diverse creativity demonstrated by the students. Quentin Willson said: "The competition has clearly captured the imagination of the student world it has been a pleasure seeing some of the UK's design talent on display. Innovation in car design is something I'm very passionate about and what better audience to look to for this than our students who are the innovators of tomorrow." 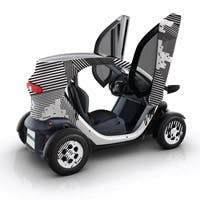 The designs are now open to the general public to cast their votes to find the lucky winners. All three Birmingham City University students are hoping to scoop the top prize which will see Renault hand over enough money to cover the winner’s tuition fees for a year. The second prize is a weekend for two in Paris, with the third prize winner taking home £250 in French Connection vouchers.

Public votes are now being cast until March 30th 2012 via www.designatwizy.co.uk, with the winner and two runners up will be announced on 16th April.