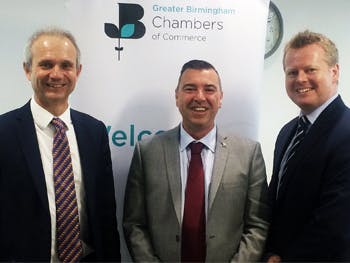 Minister for Europe David Lidington has told Birmingham businesses that the European Union is ‘not perfect’ but offered great advantages in trade and job creation during an event held at Birmingham City University.

The Minister put forward the case for continuing EU membership at a special business round table organised by the Greater Birmingham Chambers of Commerce.

Mr Lidington, who has been Minister for Europe since 2010, highlighted the lack of existing models for trade deals which would give the UK the same sort of access to the single market it currently enjoys as an EU member.

The Minister, MP for Aylesbury, called for the UK to have the confidence to ‘lead from within the EU’ – and said many burdensome regulations hitting the business sector were due to UK Government decisions rather than Brussels.

Professor Julian Beer, Pro-Vice-Chancellor Research, Enterprise and Business Engagement, Birmingham City University said: “We feel it is vital that we facilitate the EU referendum debate on campus to ensure students, staff and the wider city can make an informed decision when the vote takes place next month.

“This is why we are hosting a series of events, such as this discussion with the business community, as well as with our students and the wider public.

On Thursday May 26 at 6.15pm, the University presents ‘The Future of Europe’ with key voices from the Leave and Remain campaigns present. For members of the public who are still undecided on which way to vote, it will be a unique opportunity to put their questions to MPs from both sides in our newly-opened Curzon building.
Professor Julian Beer

”Similar to the Greater Birmingham Chambers of Commerce, our institution is taking a non-partisan stance in the EU referendum discussion.”

Henrietta Brealey, Director of Policy and Strategic Relationships said: “The result of the EU Referendum could dramatically change the way in which the UK does business with the rest of the world. It is vital that businesses are given the opportunity to gain the information they need to make an informed decision on the 23rd June.

“We were pleased to hear the Minister bring the economic and business issues into the spotlight at this event and to hear the diverse range of views represented at the session. It’s a challenging and complicated subject and it’s crucial that both sides of the debate reach out and communicate with the business community.

“The Greater Birmingham Chambers of Commerce are clearly non-partisan in this debate; according to a recent survey, 45% of West Midlands based Chamber of Commerce members would vote remain in the referendum, with another 45% stating that they’d vote leave. We see our role as being a conduit for information and facts on all aspects of the referendum debate.”