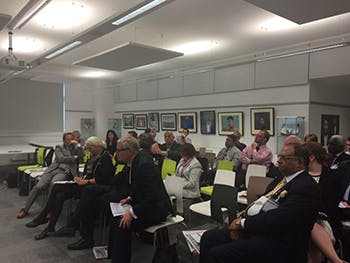 A 'holy trinity' of investment in transport, housing and education is needed to improve regional productivity, a Birmingham City University economic conference heard.

Speaking at 'A Manifesto for the Midlands' Beverley Nielsen, Director of Corporate Affairs at the university, said: "What I hear again and again is concern over the lack of long term vision and a long term plan. Is it not time that the dominant parties in this country got together a coherent plan that will secure the future of our nation and our businesses?

"There are three big improvements that could be made to our productivity as a region: investment in infrastructure, housing and early years education. These are all priorities for Government to deliver."

Professor Julian Beer, Pro-Vice-Chancellor of Research, Enterprise and Business Engagement at Birmingham City University, backed the vision saying: "You can have a highly skilled local economy with few jobs, and so people leave. Equally you can have great infrastructure and housing, as you find in dormitory towns, but a lack of opportunity, so essentially you need the three factors to combine."

Dr Steve McCabe, of Birmingham City Business School, added: "If we are to become a genuine alternative to London we need greater capability based on improved infrastructure, skills and retention. In the past too many people have got their qualifications and then disappeared.

"The importance of investing in local and national infrastructure cannot be understated. There's a high degree of support among business leaders for regional autonomy and we should be getting a bigger slice of the tax revenue to spend locally. Increasing the region’s tax-raising powers is an essential prerequisite of effective local decision-making."

The Midlands Economic Forum conference explored future devolution plans for the region, and what strategy the Midlands should take to maximise growth opportunities. Statistics provided at the event by global financial information company Markit show the Midlands is outperforming the rest of the UK post-financial crisis, recording faster employment growth than the UK average in eight of the last nine months.

There was consensus at the event on the need for strong leadership. Professor Beer believes the Midlands needs either a Combined Authority or a Mayor to achieve the 'one voice' status of the North, and added: "The alignment between local and national politics is an important one. But we don't tell our own story, and when we do we tell bits of stories from different areas. We need a united message on the key issues that affect us all – like housing and education and transport.

"I feel that if we can either create a Combined Authority or similar, or have a Mayor for the Midlands we stand a better chance, like you see in the North East and Greater Manchester of speaking and lobbying really tightly together."