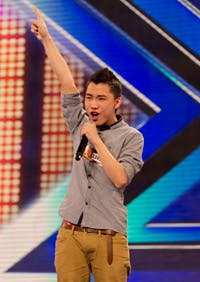 A Birmingham student has impressed judges on ITV’s hit reality show ‘The X Factor’ with a performance of Whitney Houston’s ‘I Have Nothing’.

“I sing in my bedroom, when I eat, when I take a shower. My neighbours always ask me to be quiet. I want to be a legend.”

Upon entering the stage, Jason presented Tulisa with a rose and declared his admiration for the singer. “Tulisa, I love you so much” said Jason.

After receiving a standing ovation from the audience and Tulisa as he ended his audition, the judging panel agreed that Jason deserved to go through to the next stage of the competition. “I absolutely loved it! Jason, you’ve wooed me over today. It’s a yes from me”, said Tulisa.

Jason will next perform in the Boot Camp stages of the competition, to be aired on ITV1 on 22 and 23 September. To view Jason’s first audition, click here.