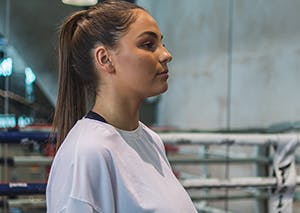 Nadezhda, who has been posting on the social media platform since 2013, now enjoys commercial success through company sponsorship. Her posts focus on health and fitness, which she’s always been interested in, having been involved in sport since the age of four and progressively learning about healthy food as a teenager.

In 2017, Nadezhda started sharing her workouts, healthy meals and snacks she’d made, and what she did to lead a healthy lifestyle and mindset on her Instagram page.

Talking about what her role as an influencer involves, she said: “It’s all about communicating with your audience, talking to them as friends and figuring out the midpoint of what they want to see and what I can create so that the content feels organic and honest.

“It involves replying to emails from brands and agencies, making sure that both parties are benefiting from any partnerships, as well as establishing contacts for future opportunities. It’s also about having a great sense for what would work on what platform and thinking on the spot about getting the content, whether that is in a video or image form.”

Gaining and growing an audience

Nadezhda gained her followers and continues to grow them by posting about what she’s interested in, and building up an audience of people who share the same interests as her.

She said: “You have to be persistent and constantly willing to improve and adapt in order to see any long-term gains and also most importantly, build trust with the audience that you accumulate.”

Nadezhda explained that people are able to make a living from being an influencer, but the influencers who earn thousands and above per post are a very small proportion. She said: “There are also different types of influencers, depending on where they come from, so most of the ones that generate bad press (and get paid the most) are celebrity influencers that come out of Love Island usually. There are some creators who have genuinely built their communities from nothing, such as Patricia Bright and Elle Darby.”

Stating that she is “brutally honest and raw” with her audience, Nadezhda said: “I try to not take myself too seriously because at the end of the day, that’s what people relate to the most. I’m interested in providing content that people can either learn from or help to take their mind off stressful stuff. I also pay attention to what my friends and family say about influencers and try to never be the person who gives a bad example to my 16-year-old self.”

Talking about how her studies at BCU help her build on the role of influencer, Nadezhda said: “Through my course I learned how to professionally communicate with people and express clearly what values I can provide to a brand so that I get fairly paid. The influencer money world is very ambiguous and I think it takes a thicker skin in order to stand up for what you believe in, because most of the time companies will want everything done to a high level without paying you enough or even paying you in the first place.

“I also learned how to better integrate my personality within the content I produce, in line with the campaigns I get involved in. This is because I’ve learned the importance of retaining the trust from people in the long term.”

Nadezhda recently shared the secrets of her success with the Business School’s PR students and staff in a seminar.

David McGee, who takes the PR and Corporate Reputation Course, said: “Nadia has a grasp of the business fundamentals relating to being an influencer that is world class.

“This is a skill that needs constant and continuous updating. If you stand still for a month, you’re left behind. Nadezhda showed to students and staff how to drive followers and importantly how to make a living.”

Nadezhda added: “It was a privilege to share some of the insights into how to grow your influencer following with my peers and BCU staff.

“It takes a lot of hard work but anyone can build a following if they keep learning and adapting. The most important thing in my experience is always be yourself, and be authentic.”