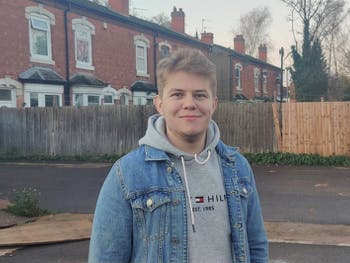 Little did Federico Bastiani know that when he started a Facebook group for his neighbours in Fondazza Street, Bologna, because he didn’t know any of them even after years living there, that the results of this action would be felt as far as Birmingham.

For elderly neighbours who didn’t have access to Facebook or the internet, Federico made posters that he pinned around the neighbourhood encouraging everyone to join the Residents of Fondazza Street group, to help each other out, do shopping for people who may struggle, let those in need use their washing machines, or offer private tuition to support the neighbourhood’s children. Invitations went out for ‘social’ group dinners, and as the group became more established the local cinema and bar even began to offer discounts to residents.

Federico’s aim was to get to know his neighbours, encourage them to talk to one other, help each other out and to develop projects of a common interest. As momentum grew for this Italian ‘social movement’, so did its benefits… even for BCU student Conor Matthews, who had never set foot in Italy.

Property Development and Planning alumnus Conor Matthews graduated from BCU this summer, and has now started his postgraduate studies in Housing and City Planning at UCL. During the summer, he was offered the opportunity to work as a researcher for the School of Engineering and the Built Environment, which led to a Careers+ micro-placement funded placement working alongside Associate Professor in City Making Dr Silvia Gullino and two external lecturers from Sheffield Hallam University and the Politecnico di Milano as a researcher on the Fondazza Street group and the ‘social streets’ movement in Italy.

Conor’s role within the research group was to read, gather and review all the papers, books, news articles and website information about this movement. His review covered its objectives, successes and failings, and how this movement could have an impact on solving social impoverishment and urban degradation in UK city centres.

The research is ongoing, and Conor said the initial review showed that ‘social streets’ have made a significant impact on improving sociability in urban and rural areas by finding common interests and generally benefitting the community it operates within.

“It has also shown that because it operates using a social media platform (Facebook), some older age groups were isolated from the benefits, as they are considerably under-represented in these online groups.”

In addition to the knowledge he has gained, the placement has made Conor more confident about writing and preparing research, especially writing his own research paper, which he will be a requirement of his postgraduate studies.

It has also given me some insight into the causes and cures for social impoverishment in urban areas – UK and abroad.

The research findings were presented at the UK and Ireland Planning Research Conference this month, where they received positive feedback.

Dr Silvia Gullino said: “It has been amazing to work with Conor as a research partner in this project. Conor is an excellent researcher. He is proactive and independent. At the same time, he is a great team player. He fitted in the team very quickly and brought great enthusiasm in this ongoing project”

CEBE Faculty Employability Manager David Bond added: "It’s fantastic to hear about the success of Conor’s micro-placement. Over the last three years the Careers+ team has placed over 250 students into professional career-related placements within the University and externally, with a range of local SMEs. It’s a great chance for students and graduates to develop their skills, build their professional networks and gain opportunities to put theory into practice. Conor’s placement really demonstrates the positive benefits to placement host organisations, and he’s clearly taken full advantage of the opportunity to work with Silvia."