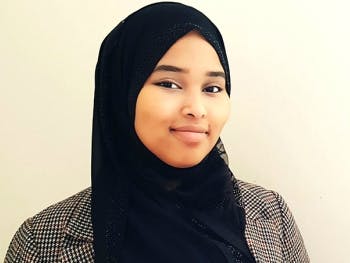 Research carried out by a Quantity Surveying student at BCU has found that one-third of construction industry professionals believes there is ‘inadequate’ knowledge and training around fire safety in the wake of the Grenfell Tower disaster.

Iman Farah Mohamed looked at industry views on fire safety following the tragic incident in June 2017, which saw 72 people lose their lives and more than 70 others injured.

She found that most professionals think ‘knowledge surrounding fire safety in the construction industry’ is inadequate, while the majority also believe higher education institutions need to do more to educate construction students on fire safety before they enter the sector.

The research, which surveyed dozens of people working in construction professions and interviewed one expert directly involved with the Grenfell enquiry, also raised concerns around fire evacuation procedures in UK hospitals.

One respondent said: “Current building regulations are compliant but I’m not sure if they’re good enough. Interestingly there are no specific building regulations for mass evacuations and having spoken to fire services, they are frightened about hospital fires as the patients are not always mobile, making evacuation difficult.”

The paper, which has been published in the International Journal of Building Pathology and Adaptation, suggests that specific roles should be created dedicated to fire safety, or that existing staff members are given the issue as a key responsibility.

It also recommends that higher education institutions encompass fire safety training in their courses, to ensure the next generation of construction professionals have the skills needed to prevent future disasters from happening.

The research showed that there remains some concern in the construction industry around the knowledge and training provided in relation to fire safety.

“Grenfell was a major incident which brought the issue to the front of people’s minds, but while the awareness in the industry has increased, most professionals want to see more from the sector and higher education providers to prioritise fire safety.

“The recommendations suggest how we can make sure professionals of the future are equipped with the knowledge they need to prevent a tragedy like this in the future, and that regulations and guidelines are updated to add a much needed extra layer of protection."
Iman Farah Mohamed