Playing around with rural futures in Birmingham and Nebraska 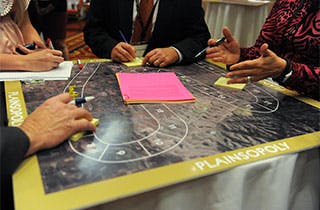 Researchers from Birmingham City University and the University of Nebraska have recently collaborated on an exciting project to develop a board game to improve the way in which the public engage with, and understand, complex land and resource management issues facing their communities.

Building on the highly successful Rufopoly game, an output from the Rural Economy and Land Use Programme in the United Kingdom where people answer real life questions from research on the rural urban fringe, Plainsopoly was born.

In collaboration with Professors Alister Scott and Richard Wakeford from Birmingham City University, a team of researchers led by Professor Jessica Shoemaker from the University of Nebraska College of Law, adapted the UK research questions to cover contemporary land use and rural development issues in the Great Plains. The result was centre stage in a session at the recent Rural Futures Conference in Lincoln, Nebraska. Over 60 participants played the game within a hypothetical landscape reminiscent of, but not directly identical to, the land base of the Great Plains. Using dice, players moved around the board, discussing various land-use questions and scenarios that enabled them to create their own overall visions for the area. Finally, participants were invited to analyse which tools of governments – at federal, state and local levels – would either help or hinder the realisation of the visions they had expressed.

Professor Scott, the architect of the original Rufopoly game, commented: “Games have a way of taking people outside their usual agendas and viewpoints creating new learning and opportunity spaces to engage with complex planning issues. Crucially this is outside the emotional space of their reality. The dice provide a powerful manager of the agendas players have to confront.

“It takes engagement and makes it fun but also creates a serious learning opportunity. Whilst the web provides a great space for engagement processes, there seems a strong attraction with a board game which involves face-to-face interaction, debate, and discussion with the added element of chance.”

Games have become an important tool for changing the face of public engagement processes by facilitating the learning that is hidden within them. Professor Shoemaker stated: “The diverse land-based resources of the Great Plains are a tremendous asset, but it is sometimes challenging to engage private landowners, community members, and other stakeholders in a productive dialogue about how to achieve the highest, best, and most sustainable uses of that land.  Plainsopoly proved to be a fantastic vehicle for speeding participants’ learning about the impact of an individual’s land use decisions on a range of interlocking concerns and for engaging participants in a robust, substantive dialogue about the future of rural places, given both the opportunities and challenges presented by current land use management policy and governance regimes.”

Whilst set in hypothetical landscapes, resulting from the games can be immediate impacts. Professor Wakeford was able to take one issue emerging from the game – the impact of capital taxation on land use – and feed it back directly to US Secretary of Agriculture Tom Vilsack. “Several Nebraskans mentioned how potential capital tax liabilities deter American farmers from retiring, making it harder for younger, potentially more innovative people to bring new ideas to the profession,” said Professor Wakeford.

“Secretary Vilsack was aware of the concern, but explained that this was one of a number of ideas he could not himself deliver but needed to be a part of a joined-up approach to shaping government tools to encourage the best use of land.” Taxation has been mentioned as a major influence on land use in Europe and with games providing an important tool in the increasing armoury of engagement weapons that can be used to help improve policy and planning processes.

Preston Peterson, a law student at the University of Nebraska who helped develop the game questions for the Great Plains setting and participated in facilitating the exercise at the recent Rural Futures Conference, commented: “The Plainsopoly simulation environment helped a diverse group of conference participants work together to address the challenges of developing and implementing a sustainable land use policy, and by putting discussions about real-world issues into the context of a hypothetical landscape, it enabled stakeholders to lower their guards so as to have a real conversation about otherwise difficult and sometimes controversial topics.”