Playing around in the Rural Urban Fringe? 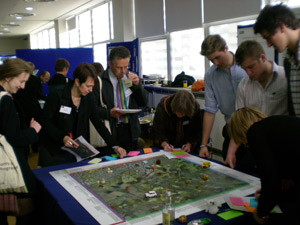 The battle to protect the green belt and the countryside can now be fought out on a board game which researchers at Birmingham City University have developed as a decision-making teaching tool. (1)

Rufopoly is an interactive game that enables people to journey through the fictitious county of Rufshire which is under constant change from new pressures for development within the region’s growing population. Players are challenged to balance the need of the countryside and the town by making decisions about the future development of the fringe space within the square they land on. Where players land is determined by the throw of the dice and each square is related to one of the four themes identified within the research. From the sum of the different decisions that players make, they are required to build a vision of the fringe to complete the game.

Alister Scott, Professor of Spatial Planning at Birmingham City University, and Director of the project (2) explains: “In the real world policy makers and planners are facing massive challenges in trying to accommodate the competing economic, community and environmental needs. The arena where this battle is most apparent is called the rural-urban fringe.

“The current planning debate in the national media over the future of our towns and countryside demands that we have an informed debate about the kind of society we want and this game provides one tool to help achieve this. In a combination of classic strategic board games like Risk and Monopoly, communities, agencies and policy makers can role play these complex decisions in a fun but in a very realistic way,” Professor Scott added.

The game was showcased at a major conference "Who Should Run the Countryside" earlier this month. It is now being taken out to students, communities and agencies to promote a wider understanding of the rural urban fringe and forms part of a 20 month research project that looks at improving the methods of managing the rural urban fringe.

The findings of the project will be presented to the public in February 2012.

The Rural Economy and Land Use Programme is an interdisciplinary collaboration between the Economic and Social Research Council (ESRC), the Biotechnology and Biological Sciences Research Council (BBSRC) and the Natural Environment Research Council (NERC), with additional funding provided by the Scottish Government and Defra. See www.relu.ac.uk for more information about the Relu programme.

The Centre for Environment and Society Research (CESR) in located within the Birmingham School of the Built Environment and studies human intervention in the physical and social environment with a strong desire to improve current and future conditions. The aspects studied are broad, and include: building operation, construction, design, property development, rural development, spatial planning, land use planning, economic planning, regulatory frameworks, plus local, national and international policy studies. The research explores, in particular, the gap between strategies and their realization – the ‘delivery-gap’. It seeks to establish greater coherence in the development of the built and natural environment, through ‘researching the boundaries’ between disciplines where many of the real strategic problems in development lie.