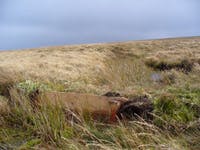 An exciting collaboration between South West Water and researchers from Birmingham City University and the University of Leeds is exploring innovative approaches to funding the restoration of peatland on Exmoor and Dartmoor.

Funded by the Natural Environment Research Council’s business internship scheme, the collaboration will bring together water, land and carbon management and will promote closer collaboration between researchers and companies whilst hoping to make great progress in harnessing peat’s power to manage water and store carbon.

Mark Reed, Project Manager from Birmingham City University said: “There are many benefits to restoring peatlands. As well as improving water flow and increasing water storage on the moors, restoration for wildlife could attract more tourists, and improve recreational access to the national parks.

“Working with land managers, we are now starting to identify which areas to target for peatland restoration. These are places where improvements will give the most benefits to the most people.”

Dr David Smith, from South West Water added: “South West Water has been working with the Exmoor Mires Project to restore the bogs on Exmoor since 2006. In 2010 South West Water committed £2.4 million over 5 years to a research-led project and this latest NERC-funded collaboration brings in even more skills and expertise.

“Our new partners will use the on-going research to develop a carbon and water based ecosystem services scheme. As well as paying for peatland restoration work, this could also bring a return to the moorland owners and tenants who have participated in this award winning project. And most importantly, water consumers in the south west will benefit from the increased water storage capacity and better regulated water flow.”

Viki Hirst, a Knowledge Exchange Fellow at University of Leeds, said: “As well as working closely with South West Water, we’re aiming to engage with a range of individuals and companies who may be interested in a way to off-set their carbon emissions by funding improvements on the moors. I would urge anyone who is interested to get in touch.’’

The project team is collaborating with Charles Cowap, a consultant based at Harper Adams University, to deliver the project. At the end of the project, the team will produce a detailed account of how this new approach to funding peatland restoration could be used to finance the restoration of other peatlands around the country.