New book on town planning in Birmingham to be published 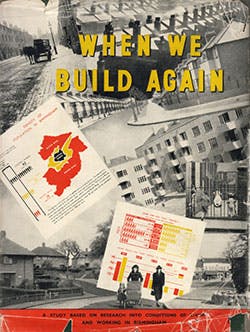 As part of a series of reprinted classic town planning studies, Routledge will this week publish a new book focusing on the planning and rebuilding of Birmingham in the 1940s and 50s.

‘When We Build Again’ is a reprint of two classic books, with a new introduction written by Peter Larkham, Professor of Planning at Birmingham School of the Built Environment, part of Birmingham City University.

“The 1940s proved to be a crucial decade in British planning, with the destruction of wartime bombing providing an opportunity to deal with slums and overcrowding, inadequate roads, and provide better developments for hospitals, schools and employment,” said Professor Larkham.

“Several hundred plans were produced for towns, cities and whole regions. Birmingham was influential in this movement and one of the earliest planning studies, affecting many of the plans to follow, was a detailed social study by Bournville Village Trust.”

‘When We Build Again’ outlines the Cadbury family’s long-standing involvement looking into housing conditions and quality in Birmingham, as well as looking specifically at the village of Bournville, set up and managed by the Trust.

“The book will be of interest to those who are keen to know more about the study that the Trust were involved in, reviewing housing and living conditions across Birmingham,” said Professor Larkham.

“The study shows the contribution of private initiatives to understanding how people lived, how they wanted to live and how better places to live and work could be built. In many ways, modern planning has lost some of this ability to communicate both the clear factual basis for action and the excitement and anticipation of the future.”

Find out more about 'When We Build Again'.