Breastfeeding scarf inventor to be honoured by University 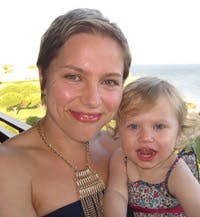 A former student who has made her name as an inventor and businesswoman is among the outstanding former students who will be honoured at Birmingham City University’s forthcoming graduation ceremonies.

Keira O’Mara graduated with a BSc (Hons) degree in Environmental Planning in 1998 and is being honoured as one of the University’s Alumni of the Year in the Enterprise and Innovation category.

After initially working for a social research consultancy, and then in a number of sales and marketing roles, redundancy and motherhood prompted a major change in Keira’s life.

As a result of difficulties experienced when feeding her baby in public, Keira came up with the idea for the ‘Mamascarf’– a hammock-type device which goes around the mother’s neck to shield and support the baby at the same time.

The design proved a big hit with mothers across the country and, after getting an initial run of 50 produced which she sold through her own website, the scarf attracted enough attention to go on sale in Mothercare, Amazon, Tesco, Boots and Kiddicare. Also in the pipeline are plans to start exporting the product through specialist distributors, while Keira is now busy developing more innovative new baby products through her company Mama Designs Ltd and is set to launch her second product, a Babasac 2-in-1 multi tog sleeping bag. At the moment, the business is still a solo project but she hopes to be able to expand and create jobs in the future.

Keira has won numerous awards and recognition for Mamascarf from organisations including Mumsnet (Mumsnet Best 2010) and Practical Parenting & Pregnancy (Finalist, 2010; Silver, 2011). She has also become a familiar face in the media, commenting on business and family matters for outlets including ITV News, GMTV, Sky News, The Independent, The Guardian, and the Mail on Sunday, as well as several baby magazines.

Keira is delighted at the success of her business and says she hopes to continue doing it for a long time to come, as working for herself allows her to successfully combine parenthood and business.

“This wasn’t something that I planned at all but it came along at a time when I was looking for a more flexible job so I could spend more time with my family and it’s all worked out well for me,” she said.

“I was really pleased to be nominated for Alumni of the Year, and it was great to be recognised by my old university in this way.”