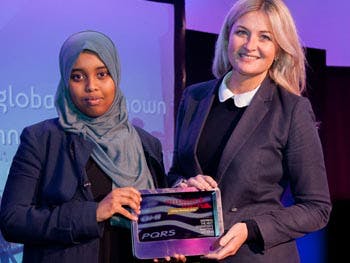 A talented Birmingham student has been awarded the Millennium Point Trust Young Innovator Prize - landing them a sponsored degree at Birmingham City University in the process.

Sagal Abdirahman Jama Qodah of Ark St Alban’s Academy won the scholarship for an undergraduate degree in the University’s Faculty of Computing, Engineering and the Built Environment ahead of six other finalists.

Sagal competed in a nail-biting live final where she presented to an audience and esteemed judging panel in order to win her place on a three-year course starting in September.

The 18-year-old winner who impressed the judges with her presentation on ‘Cleaning The Planet’ saw the title return to Ark St Alban’s Academy who previously won in 2015.

Sagal said: “I can’t believe I won this year’s Young Innovator Prize, it’s definitely a dream come true. Winning a sponsored undergraduate degree now means I can pursue my passion for civil engineering at Birmingham City University and hopefully go on to achieve and deliver what I outlined in my presentation.

“I am very thankful to be given this once in a lifetime opportunity by Millennium Point and can’t wait to start university.”

Now in its third year, this year’s event was hosted by BBC Midlands Today Science, Environment and Rural Affairs Correspondent, David Gregory Kumar. The prize was open to all schools, academies and colleges in the country with applicants submitting a video application in order to become shortlisted as a finalist.

Conceived by Millennium Point Trust and launched at the end of 2014, the prize is designed to encourage talented young people from all backgrounds to study science, technology, engineering, computing and design whilst ensuring that the region retains its reputation as one of the UK’s centres for innovation and research.

The judging panel was made up of Professor Hanifa Shah, Associate Dean in the Faculty of Computing, Engineering and the Built Environment at Birmingham City University, Lisa Stallard, Museum Manager at Birmingham Museums Trust and Russell Jeans, Chief Operating Officer of the Greater Birmingham Chambers of Commerce.

This year’s runner up was Samir Sydykov from High Wycombe, and other finalists included Khalid Saleh from Ark St Alban's Academy, Suzan Musa from Sandwell College, Joshua Hadabora from Redditch, Hamza Daud from Leicester and Vithushan Ravindran from London.

Simon Handley, Associate Dean for Academic Portfolio and Market Development at Birmingham City University, said: “It has been a privilege to partner with Millennium Point once again to create this joint funded opportunity for a young individual who we will, I’m sure, go on to have a flourishing and rewarding experience at Birmingham City University.

Events such as the Young Innovator Prize truly showcase how we can work together to support the next generation of young people who wish to pursue their passion for science, technology and engineering.
Simon Handley

The two previous winners of the Young Innovator Prize winner, Malik Sheryar-Karamat and Abigail Lavercombe, also attended the event to show their support to this year’s finalists. Malik is successfully undertaking a Mechanical Engineering course at Birmingham City University, whilst Abigail is studying Civil Engineering.

Neil Anderson of Millennium Point Trust, says: “With more than 40 per cent of our population consisting of young people, it’s imperative that Birmingham takes action to support the next generation.

“Additionally, it is widely reported that young women are vastly under-represented in science, technology and engineering based careers and it is an honour to crown Sagal as this year’s winner.