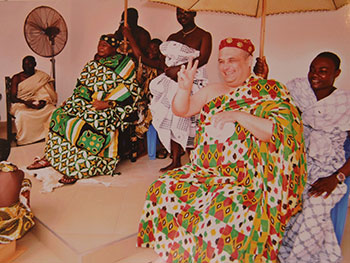 A Birmingham City University Professor has been bestowed the honour of ‘Chief for Educational Development’ for a collection of towns and villages in Ghana.

Professor David Edwards was presented the honour at the Royal Palace in Aaskyiri in recognition of his ongoing commitment to local students and the progression of education in the region.

Professor Edwards said: “It’s such an honour and privilege to be nominated to become the Chief for Educational Development in Asakyiri.

Ghana is the shining star of Africa, its progress in primary education should be seen as a massive beacon of hope and inspiration for all Africans."

However more needs to be done to raise the importance of further and higher education. Two-thirds of Ghanaian’s (26 million people) are farmers – there is so much more we could be doing with this talent to help move the country forward.

I hope to use my time in Ghana to begin working with younger children at nursery, primary and secondary levels to help guide their further learning. Eventually I would like to see all locals of Asakyiri have a fair shot at a university education and the opportunity to transform their lives.

90% ...of Ghanaian children are now in school, compared with 64 per cent in Nigeria and 72 per cent in Pakistan.

In 2009 Professor Edwards took up the post of Visiting Professor at the second largest university in Ghana, Kwame Nkrumah University of Science and Technology (KNUST). The post followed the new education plan for Ghana that was finalised in 2007 which proposed plans to get more children into education by 2015.

Since then Ghana has been heralded as a role model for many African countries due to its access to free basic education. Almost 90 per cent of Ghanaian children are now in school, compared with 64 per cent in Nigeria and 72 per cent in Pakistan. Ghana spends 8 per cent of GDP on education, more than the UN’s 6 per cent benchmark and more than the UK’s 6.5 per cent.

Professor Edwards has held a dual role for the last six years, both as an academic mentor for students in Ghana and a lead researcher in construction and civil engineering for Birmingham City University. During Professor Edwards' mentoring role in Ghana he has supervised and examined over 25 PhD students and co-authored more than 250 research papers.

The official Ghanaian ceremony was held at the Royal Palace in Aaskyiri in front of the town’s residents which included dignitaries, local schools, churches and fellow chiefs. Professor Edwards was presented with the traditional Ashanti sandals, a hand woven Kente cloth and a crown before embarking on the ceremonial dance and being invited to take his official stool at the side of Nana Mensa Bonsu.

Nana Mensa Bonsu, a professor at Kwame Nkrumah University of Science and Technology, said: “Professor Edwards has consistently demonstrated great leadership and commitment to inspire staff and students at the University. He has always given his time generously and tirelessly and has assisted colleagues to improve upon their personal development and academic profile. Such qualities are rare and I have every faith that David will continue to bring his international standards into his role at Chief for Educational Development in Asakyiri.”

Professor Edwards concluded his visit to the Royal Palace by donating 1,500 Ghana Cedi to the local schools.