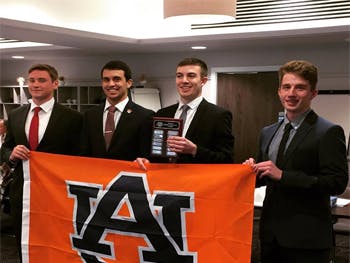 Students from the School of Engineering and the Built Environment have won the first and third prizes in the Associated Schools of Construction (ASC) Region 8 International Competition.

The competition, held at the University of Reading in November, brought together students of construction-related fields from universities in Ireland, Czech Republic, USA and UK.

School of Engineering and the Built Environment

Students worked in teams of four on a real life construction project, which this year focused on student accommodation. Birmingham City University entered two teams. One of the teams was made up entirely of BCU students and coached by Mustafa Selcuk Cidik (Assistant Lecturer at BCU). The other was a composite team with two BCU students and two students from Auburn University in America, and coached by Angela Kilby (Senior Lecturer at BCU). In advance of the competition, the teams prepared a report on the problem set with support from staff from their university.

Students of the composite team were also supported by two final year students, Jack Lenehan, who volunteered as a student coach, and Josh Prescott, who gave students in the BCU/Auburn team access to his office at the City South Campus building project. This gave students the benefit of working in a real site office. Both Jack and Josh are previous winners of the competition. Tommy Lee Cox, who graduated in Architectural Technology in 2015, also came to work with students of the composite team during their time on site and help them to prepare their report.

On the day of competition, the teams were handed a new problem relating to the project and worked in their teams to develop a response, without any contact with their coaches. They presented their proposals to an industry panel the following morning. Each team gave a 10 minute presentation followed by a Q&A session. The judges then selected the top three teams for the final stage of the competition.

Both BCU teams reached this final stage where they were asked five questions by the panel before the judges made final deliberations and announced the winner.

Winning the ASC competition felt very fitting considering the amount of work I and the rest of my group put in. I hope the award will complement my applications for future graduate jobs.

Angela Kilby, Senior Lecturer at BCU, who coached the BCU/Auburn team along with a colleague from Auburn University said of the experience:

It was a real BCU collaboration with lots of different people coming together to make a really successful project. It was particularly great to use the expertise and skills of recent graduates and senior students. Having previous winner Jack Lenehan as a student coach was really inspiring for students to show them what they could achieve. I am very proud that our students have been involved in a winning team for another year.