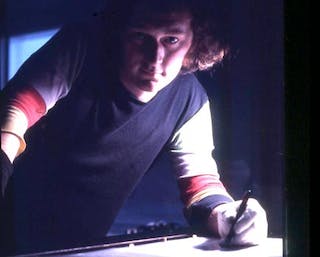 Back in the mid-1970s, Ian Emes was the first student to study animation with us - and this pioneering creativity led to global success with Ian working with the biggest names in rock and pop.

After studying fine art at Birmingham School of Art, now part of Birmingham City University, Ian began his career as an animator. His award-winning experimental film French Windows (1972) was shown on the legendary TV rock programme The Old Grey Whistle Test, which brought him to the attention of Pink Floyd. Impressed, the band then commissioned him to direct their first animated concert film for The Dark Side of the Moon in 1974, including the legendary Time sequence.

Ian also acted as advisor on Floyd's following masterpiece, The Wall, while creating other animations for Mike Oldfield's Tubular Bells (1975) and the iconic Oriental Nightfish for Paul and Linda McCartney, winning a Palm D'Or nomination at Cannes in 1978.

During this period Ian made numerous experimental films such as The Beard (Berlin 1980), and The Box of Delights (BBC 1984). His London studio quickly gained a reputation for ground-breaking visuals and he was hailed as the foremost British animator of the 1980s, winning accolades around the world. In 1982 his achievements were celebrated in a retrospective at the National Film Theatre.

Ian has diversified into live-action work, writing and directing short films, among them Goodie Two Shoes, which received a British Academy Award and Oscar Nomination in 1983.

Music videos have included The Chauffeur, for Birmingham band Duran Duran in 1982, and The Wall: Live in Berlin, a 1990 performance led by Roger Waters and starring Rupert Everett and Marianne Faithful. Ian has directed numerous award-winning commercials for Ridley Scott Associates.

Now Ian is bringing an exhibition of his biggest and best-known work back to where his career began - Birmingham City University from Saturday 16 November to Friday 17 January.