Liang Yuanwei was born in 1977 in Xi’an, the capital of Shaanxi province. She graduated from the School of Design at the Central Academy of Fine Arts (CAFA) and was a founding member of N12, an enterprising young art collective that exhibited together in the early 2000s.

As one of the most important artists of the emerging generation, Liang Yuanwei has exhibited her art in various spaces including the Ullens Center for Contemporary Art (Beijing), the Museum of the China Central Academy of Fine Arts (Beijing), the Shanghai Minsheng Art Museum (Shanghai), the Berkeley Art Museum (U.S.A.), the Foundation Joan Miro (Spain), etc. She was also one of the participating artists in the China Pavilion at the 54th Venice Biennale (2011). Her solo exhibitions include Oval (Xi’an OCAT, Xian, 2015); Pomegranate (Beijing Commune, 2013); Golden Notes (Beijing Commune, Beijing, 2010); 51m: 15# Liang Yuanwei (Taikang Space, 2010); and BLDG 115 RM 1904: Liang Yuanwei’s Solo Show (Boers-Li Gallery, 2008). Her solo show Golden Note at Beijing Commune (2011) was selected by ARTFORUM magazine as one of the most noteworthy shows of the year in painting. Her most recent solo exhibition, The Tension Between a Bow and an Elephant (Pace London, UK, 2014) was selected by ArtInfo as the “Must See: 5 London Shows Opening This week”. Her works have been included in publications such as Younger than Jesus (Phaidon, 2009) and Vitamin P2 (Phaindon, 2011). Her recent exhibitions include My Generation: Young Chinese Art-ists (Tempa Museum of Art; Museum of Fine Arts, St. Petersburg; Orange County Museum of Art, 2014-2015) and Focus Beijing: the De Heus-Zomer Collection (Museum Boijmans Van Beuningen, Rotterdam, the Netherlands, 2014).

While Liang Yuanwei concerns herself with traditional painting, what she carries on are methods of composing and constructing a painting. Her reflections on the topic of painting as a thing in itself compelled the artist to abandon the narrativity of the picture plane, and to use ready-made embroidered flowers and the texture of other primitive materials as a blueprint for her paintings. This work method, reminiscent of a scientific experiment, and this form of expression, which appears to be worlds apart from that of traditional Chinese painting, were actually inspired from the general design of Song-dynasty ink paintings, and the cunfa (texture strokes) used to depict lofty mountain landscapes. Like an artisan, day and night, Liang embroiders and elaborates her own world indefatigably — for only between one brush stroke and another is she allowed to engage in this dialogue with the ancient sages of traditional art. Liang Yuanwei’s flower motifs are like a de-tail from a pattern that could be expanded infinitely: they seem to have neither beginning nor end, neither prelude nor climax, and perhaps not even an actual composition or varying density. All they embody is a rhythm made of distance and linkages, overlaps and extensions — or the exquisite rules of composition governing traditional painting: simple yet complex, down-to-earth and yet delicate and charming. 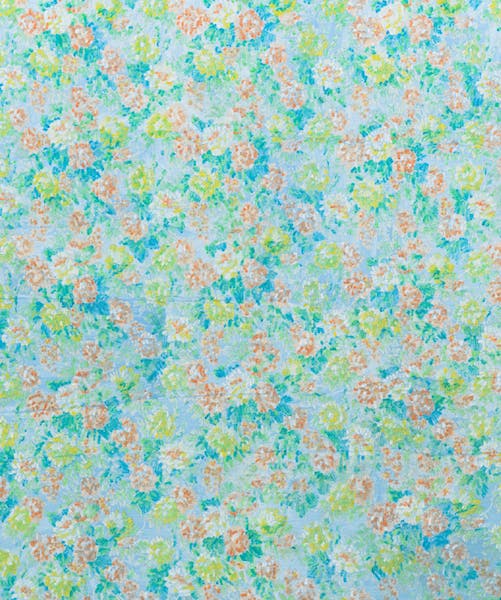 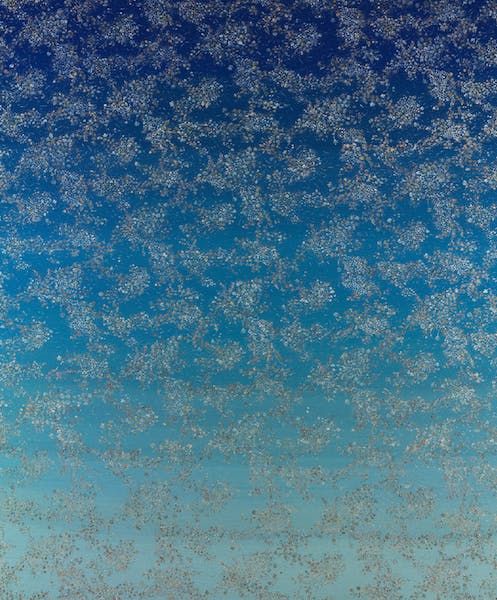