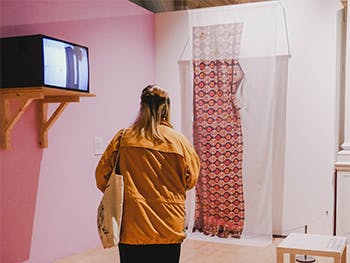 Fine Art graduate Farwa Moledina is currently exhibiting her work 'Not Your Fantasy' within the famous Birmingham Museum and Art Gallery (BMAG).  The museum is host to the 'Women Power Protest’ exhibition celebrating female artists who explore identity and social commentary within their work.

Marking a century since the first women won the right to vote, 'Women Power Protest' brings together modern and contemporary artworks from the Arts Council Collection and Birmingham’s to celebrate female artists who have explored protest, social commentary and identity in their work.

Showcasing pieces by celebrated artists including Susan Hiller, Lubaina Himid, and Mary Kelly, as well as sometimes controversial artists such as Sam Taylor-Johnson, Sonia Boyce, and Margaret Harrison, the exhibition does not shy away from difficult subjects, nor underplay the genius behind these artworks.

Farwa explains how she became involved in the exhibition: “the curator, Emalee Beddoes-Davis, came to the Birmingham School of Art degree show and she liked my work. She emailed me via my website and asked if I’d be interested in exhibiting. Obviously I was really happy to hear that and we went from there. Coming straight out of University the opportunity was such a massive deal. It’s good to know representatives from BMAG and other galleries visit and do take notice of our work. The degree show is such an important aspect of the course for us.”

"The images are composed of a Muslim woman fully clad in white, set within a white background. The lack of is crucial as it negates all exotic and erotic orientalist stereotypes – the woman is not perceived according to her surroundings. The only element of colour within the piece is the fabric. I created the fabric pattern using elements of previous photographs from this project, sections of Ingres’ Grand Odalisque, and embroidered text. The fabric has a geometric pattern associated with Islamic artwork. Composing the fabric of these different elements and the inclusion of the text indicates the Orientalist aspect of the work to the audience. The use of sublimation printing on fabric allows for a bridge between modern photography and 19th century painting."

“A lot of my artwork is about being a Muslim feminist because people don’t really understand those two can go together. It was such an absolute honour for me to be in an exhibition that celebrates women. To have my work exhibited in the same space as the likes of Mary Kelly and Lubaina Himid -  artists that I have long looked up to - is a dream come true.”

Farwa went on to explain why Fine Art is such an interesting subject to study:

Fine Art is such a broad subject you gain so many skills from. Even if you decide later that you don’t want to work within an art setting you have the skills to take on any other job. The degree teaches you to write well, how to deconstruct ideas and if you work hard you learn a lot more than how to paint or draw. It’s such a broad subject area.

“The great thing about Birmingham scene is that it’s not small, but it’s not as saturated as London would be. Everyone knows each other and it’s so incredibly supportive. It’s nice to have my work on at three different exhibitions across the city."