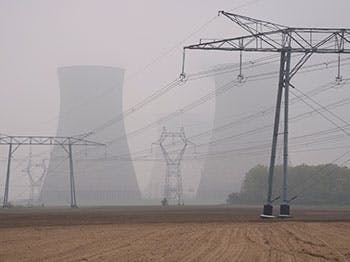 Science has failed to get people to think seriously about global warming, according to British artists.

Human activity has 'remoulded' the look and feel of our landscape but we are yet to appreciate how much we have taken modern energy for granted, according to Dr Geof Rayner, curator of an art exhibition taking place at Birmingham City University this month.

The exhibition, The Metabolic Landscape, will showcase the damaging and depressing impacts of fuel extraction and our reliance on modern energy.

"Science has been useless at getting us to think about energy use and climate control. Science communicates through numbers and words, which isn't always easily accessible for all," says Dr Rayner.

"Art communicates visually, through colour and feeling, it brings you into a different mode of being and touches you in a way that science is poor at doing."

Made up of work from artists Gina Glover and Jessica Rayner, the exhibition features previously empty landscapes now serving the purpose of supplying energy through coal mines, oil rigs, wind turbines, gas fracking pads and nuclear power stations. The public showcase serves as a "wakeup call" for people to realise the impact we are having on nature due to our immense demands for energy and hopes to go some way to changing our habits.

Birmingham, birthplace of the industrial revolution, was chosen as the city to launch The Metabolic Landscape, with the exhibition being inspired by Birmingham-educated biophysicist Alfred Lotka. Described as an "unsung hero" by the exhibition curators, Lotka was the first person to predict that the future of humanity would be endangered if nature was compromised for the burning of fossil fuels.

The accompanying 128 page book, co-authored by Geof Rayner, Jessica Rayner and Gina Glover - 'The Metabolic Landscape: Perception, Practice and the Energy Transition' - is being launched at the exhibition.

The Metabolic Landscape will be free and open to the public from 6 - 24 October (excluding Sundays), at Birmingham City University's Parkside Building. The curators will be holding a public talk on Wednesday 8 October at 5pm, in The Parkside Building – attendees can register their interest to ixchelt.acevedo@bcu.ac.uk.