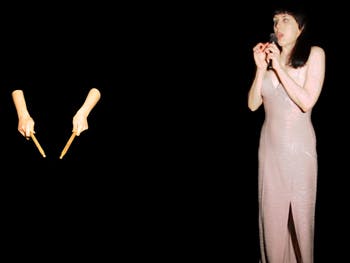 Poppy Twist was awarded a £1,000 prize, Yazmin Boyle will be given a solo exhibition at the Royal Birmingham Society of Artists and Halina Dominska will undertake a week-long residency at Sidney Nolan Trust in Hereford as part of h.Art Week in September.

The trio form part of a cohort of 31 artists selected from a raft of applications to display their work at Birmingham Museum and Art Gallery (BMAG), MAC Birmingham, Wolverhampton Art Gallery and Worcester Museum.

They were named as the prize winners in recognition of their work including Poppy’s pieces inspired by the world of performance and pop culture, Yazmin’s three-metre metal sculptures named Orbita and Halina’s Skin-like cocoons which hang from the ceiling and as you walk towards them begin to breathe.

New Art West Midlands opens this weekend (February 18) and will run until May 14 to showcase selected pieces from artists trained at art schools in Birmingham, the Black Country, Coventry, Hereford and Worcester.

Poppy Twist said: “Being involved has been an overwhelmingly positive experience and the support that I have received, particularly from Lisa Beauchamp at Birmingham Museum and Art Gallery, feels like a real tipping point for me professionally.

I'm really encouraged by how immensely high the standard of work is - not just in BMAG - but across the entirety of the programme. Having seen the work on display makes my inclusion all the more humbling and I highly recommend visiting all the venues involved across the Midlands.
Poppy Twist

“I've also produced a limited run of 40 fan scarves which will be on sale at BMAG from Saturday the 18th of February. These are the same designs that are used in my exhibit.”

Yazmin Boyle said: “New Art West Midlands is a fantastic platform for new art graduates, the exhibition plummets you and your work into a highly skilled art network, which in turn has the potential to domino further opportunities and experiences.

“My large scale sculptures are being shown at the Waterhall Gallery. Interestingly, the work lays just over the road from my old student stomping ground, The School of Art at Margaret Street which I feel gives the experience a comforting yet nostalgic feel.

“I will be coming back to Birmingham City University in September to complete my Master’s in Fine Art in an attempt to later fulfil my dream and gain a PHD.”

Halina Dominska said: “The experience of working towards an exhibition for a prestigious venue is invaluable along with all the help and support that's been offered.

“I describe my current work as abstract living sculpture, it comes alive with audience participation. As you walk towards the work it begins to breathe.

“Every aspect of the work has intuitively evolved with concept and audience in mind. An organic form with no corners or edges, materials which sit close to the skin, colours which are perceived to make materials seem softer.

“I cannot thank all my lecturers at Birmingham City University enough for helping me to get to where I am today.”

New Art West Midlands has been running for five years to help develop the careers of the region’s artists with previous exhibitors having sold work to the national Art Council Collection and gone on to hold solo exhibitions in renowned galleries.

Megan Evans, whose work is created using lipstick and foundation to portray stark images of cosmetic surgery, added: “I set out to depict the often brutal and bruising processes of what are violent acts against the self, and the endurance of an interim period of ugliness before healing reveals an end result that makes someone more beautiful in their own eyes.

“Currently due to me being on my PGCE to become a Secondary Art and Design teacher, I felt it opened up another pathway to my own practice and work style and would hopefully help to push me in a range of directions, not only in education but also in the art world.

“The opportunity to even get selected came as such a surprise to me, and I can’t say thank you enough for what is to come with being one of the selected artists.”