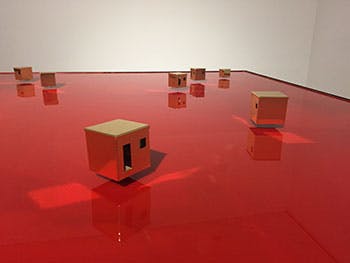 The notion of shadows in art will come into focus as part of an exhibition curated by a Birmingham City University academic that opens in Shanghai, China this week.

Professor Jiang Jiehong, Director of the University’s Centre for Chinese Visual Arts has been working with independent curator Mark Nash to create ‘The Shadow Never Lies’, which features works from 35 different artists from countries around the world, including Australia, Palestine, South Africa, UK and USA.

Showcasing a mixture of styles, the artwork is linked by the concept of ‘yingxiang’, a Chinese word that translates literally as ‘shadow image’ in English. Within the context of contemporary art, ‘yingxiang’ refers to visual media including photography, video, film and animation – whether produced through traditional or digital techniques.

‘The Shadow Never Lies’ sets out to to explore the concept of ‘yingxiang’ beyond its simple definition of a visual medium. To many, what we see in a photograph is ‘true’, and the foremost function of ‘yingxiang’ is to record this reality both visually and durationally.

However, the ‘objectivity’ and the ‘materiality’ of ‘yingxiang’ do not necessarily provide ‘truthfulness’, while the practical production process, if regarded as merely mechanical, can act as a mask for its ‘objective’ appearance. The artwork on display in ‘The Shadow Never Lies’ will showcase to audiences how ‘yingxiang’ fabricates and interprets a different reality than what is initially seen by a viewer.

“In art there are different aesthetic traditions and cultural understandings of shadows between East and West. For example, in the early 19th century, photography was born as ‘the art of fixing shadows’ and today, with our reliance on digital technologies, our shadows bring us closer than ever before to our physical selves.

I deliberately wanted this to be an exhibition that represented artists from around the world. It is designed to show how concepts and their artistic preoccupations cross political and cultural boundaries.

Shanghai-born Professor Jiang is a leading world figure in research on contemporary Chinese art and visual culture. In 2007, he set up the Centre for Chinese Visual Arts art Birmingham City University, which constructs a unique academic network with two leading art institutions in China – Central Academy of Fine Arts in Beijing (CAFA) and China Academy of Arts in Hangzhou (CAA). As a respected curator, he has led on exhibitions at CAFA Art Museum in Beijing, Guangdong Art Museum and the 4th Guangzhou Triennial.

More recently Professor Jiang has been nominated for the Award of Art China (AAC 2016) in the Best Publication category. His book, ‘An Era Without Memories’, a collection of photographs by contemporary Chinese artists responding to the urbanisation of their country, is the only English title in the 10 shortlisted books worldwide.

His latest exhibition, ‘The Shadow Never Lies’ opens to the public on Saturday 30 April at the Shanghai 21st Century Minsheng Art Museum (M21). Located in the former French pavilion of the 2010 World Expo, the museum was established with the purpose of promoting contemporary art and culture, as well as to break down the traditional barriers between art and the general public.

One of the works featured – ‘Lost Houses’ – is by Palestinian artist and Birmingham City University Pro-Vice-Chancellor, Professor Bashir Makhoul. The piece features his signature cardboard houses seemingly floating in air, representing unsettlement and the continuous displacement of people across borders and nations.

“I am delighted to be exhibiting among such a strong calibre of artists from around the world. The concept and reality of shadows is one that is shared between all cultures and, as a result, it will be difficult to detect immediately whether an artist is from the East or the West in this exhibition.”

An internationally recognised practising artist, Professor Makhoul has exhibited at the 2013 Venice Biennale and at the Aichi Biennale in Japan. His latest book, ‘Conflict and Compassion: A Paradox of Difference in Contemporary Asian Art’, will be published on 1 May.

In September 2016, Birmingham City University will launch its MA Contemporary Arts China course, the first of its kind in Europe. The course will aim to foster innovative perspectives and new understandings of Chinese contemporary art, design, visual culture and contemporary China, through transdisciplinary practice, research training and professional development.

Located in Hubei’s capital city, it is the first non-profit, Chinese-foreign cooperatively run educational institution in the province to offer undergraduate programmes. Birmingham City University is one of just 63 universities in the world to be given the green light by the Chinese Government to set up a jointly run higher education institute in China.