Graduate to take up residence at Birmingham Museum and Art Gallery 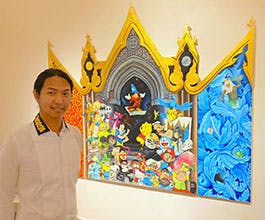 A recent graduate of Birmingham School of Art will take up position as Artist in Residence at Birmingham Museum and Art Gallery (BMAG) this month.

Tuschara Kiewpukdee graduated with a BA (Hons) in Fine Art earlier this year. He won the opportunity to be based at BMAG for a month following an application process that started when the museum’s director Toby Watley visited the University.

Tuschara specialises in painting and has already created a number of Wall Art pieces for public spaces including Wat Santiwongsaram Buddhist temple in Birmingham. Tuschara says:

"I mainly create my artwork based on my environmental surroundings, on the subject of cultural differences. Essentially I am a documenter, an artist who likes to capture a moment in society and public places, for instance, the temple, where an act of ethnicity and morality shares a space where the public socialise.

Balancing university life and competing against full time athletes is a difficult challenge, but nothing worth doing comes easily. I’m passionate about architecture, but equally passionate about racing my bike on the world stage, and I’m not willing to compromise on my aspirations for either.

As part of the residency, which runs from Monday 26 September to Friday 21 October, Tuschara will be tasked with producing a piece of work inspired by the items in BMAG’s collection. This work will then be presented at a Trustees meeting in January 2017, with a view to being shown at BMAG in the future. Tuschara will also exhibit his past and current work, give an artist talk and meet with the public.

Tuschara has already given some thought to the work he will create at BMAG. “As a graphic and realist painter I am imagining creating a series of paintings of items and of an event that once was a historical moment and can be linked to today’s life.

“By being able to work within the museum I’ll be able to spend time observing and recording the visitors and how they interact with the artwork. I will also be inspired by the artwork itself: how the masters use their painting skills to capture the moment and the way the object is recorded and documented."

Tuschara is also using the residency as an opportunity to showcase the work of other artists. He will invite art students from different cultures to visit the show and create a piece of art inspired by their visit, which will be exhibited in the last week of the residency. Five other artists, including  Tabi Lampe and Autumn Naish, will also be invited to produce a piece of work to join the exhibition on a rotating basis, keeping things “alive and moving” and showcasing different perspectives.

Tuschara is proud to be the latest graduate from the School of Art to create work for BMAG. "Birmingham School of Art and BMAG both opened in 1885 and over the years BMAG has displayed numerous works by School of Art alumni. I don't think that many students realise that this long history exists between the two institutions."

You will also have the opportunity to see Tuschara’s work as part of the New Art West Midlands 2017 exhibitions, which will be shown across four venues from 18 February: Waterhall Gallery, Birmingham Museum & Art Gallery; mac Birmingham; Wolverhampton Art Gallery and Worcester City Art Gallery. Tuschara is looking forward to returning to the University in September to start studying for his Masters in Fine Art.