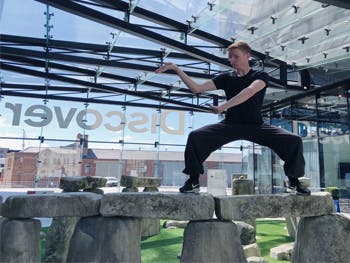 A new art exhibition exploring and celebrating the relationship between Liverpool and its twin city of Shanghai has gone on show in public spaces and galleries across the North-West city.

Curated by Professor Jiang Jiehong, from Birmingham City University’s School of Art, the exhibition highlights the urban and cultural evolution of both Liverpool and Shanghai, through the work of 10 leading and emerging artists from China.

Presented by Culture Liverpool in conjunction with Open Eye Gallery, the This is Shanghai exhibition is being staged at locations across Liverpool’s iconic Waterfront.

Pieces are being showcased at Tate Exchange Liverpool, Mann Island and in some of the city’s public spaces.

The project, which aims to explore and reimagine Shanghai’s everyday reality within the city of Liverpool, officially opened on Friday 14 July.

This is Shanghai has been produced to coincide with the 10th Liverpool Biennial - celebrations which mark the anniversary of Liverpool being awarded the title of European Capital of Culture in 2008.

Curator Professor Jiang is originally from Shanghai, but has lived in the UK for 20 years. He has spent time travelling between the two countries and examining the cultural and differences and exchanges between them.

A collection of 10 artists with a connection to Shanghai and China have been selected by Professor Jiang to have their work included in the project.

Professor Jiang said: “There are three reasons to choose Shanghai as the focus of this curatorial project, as part of the ‘China dream’. First, obviously, as the second largest city in China with a population of more than 24 million people, Shanghai has become an influential global financial centre.

“Secondly, Shanghai has been an official sister city of Liverpool since 1999. And thirdly, this exhibition of contemporary art from China is to be staged at the Cunard Building and public spaces in Liverpool.

Envisaging the similarities between the two cities, in particular the Waterfront in Liverpool and the Bund in Shanghai, this ambitious project encourages artistic reflections on the urban evolution and transformation in the context of globalisation.
Professor Jiang

“The exhibition will also explore Chinese contemporary arts and culture, and extend, translate, and reimagine Shanghai’s everyday reality in the city of Liverpool. This is Shanghai.”

This is Shanghai runs until Friday 7 September.