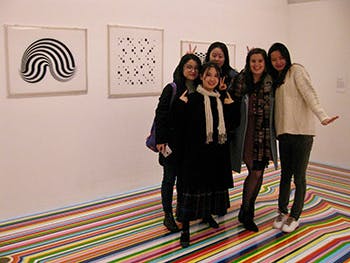 Students across undergraduate and postgraduate courses have the opportunity to visit Tate Liverpool to gain a first-hand insight in the exhibitions and the institution.

Undergraduate students recently visited the Moon Kyungwon and Jeon Joono exhibition: News from Nowehere. The exhibition showed Liverpool though the eyes of a man who has travelled through space and time to arrive in the city on the eve of the apocalypse.

Using the strategies developed in the psychogeography workshop, students navigated the Tate Liverpool galleries collecting records that draw on the artworks exhibited. However, they did not just be recording their experience. They used the material available, artworks and anything they encountered along the way, to weave a narrative for a future fiction.

The student’s final outcome was an ambitious final record of their psychogeographic experience, which proposed an alternative reality or future fiction.

It's not just undergraduate students getting the benefit of our partnership. Recently students from MA Contemporary Arts China visited Liverpool. Here’s student Maite Luengo Aguirre’s thoughts on the visit:

The trip to Tate Liverpool was a delightful experience: not only did we have the chance to get to see a great variety of well-known artists displayed, it also gave us the chance to encounter a biennial, for some of us that was the first time.

“After being warmly welcomed by a member of the staff, we were invited to ask any question regarding a potential work placement within this institution. Once all of the questions were answered, we ventured into the exhibitions.

“The contrast between two of the different display approaches were highly inspiring: these being Op Art in Focus and Constellations: Highlights from the Nation’s Collection of Modern Art. While the first one addressed Op Art movement in a hypnotic and mesmerising way, the following exhibition proposed a selection of a wide variety of artworks, creating new dialogues among them. Regarding the part of the Liverpool Biennial hosted at the Tate Liverpool, I would like to emphasise the immersive environment that the Korean artist Haegue Yang created, mixing traditional crafts and industrial methods in a wide range of artistic mediums.

“Thus, it goes without saying that the aspect I most enjoyed at Tate Liverpool was the diversity of curatorial approaches, as well as the artists displayed. As a result, this prompted us to discuss about our experience in the museum, an exchange of ideas that continued on our way back to Birmingham.”