Adam was initially attracted to working for Gensler due to it being the world’s largest film of architects, and the prospects of working with different people and making useful contacts. Adam worked in their small Birmingham office with 12 employees giving him a more personal experience with the added benefit of being part of a much larger film.

After I had chosen the firm I wanted to work at, BCU organised the placement and put me in touch with Gensler. I organised a meeting with them to introduce myself, discuss my placement and show some of my recent studio work. 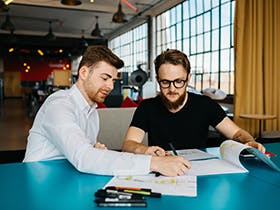 Gensler’s Birmingham office is based in the Custard Factory in the heart of Birmingham’s creative district, giving Adam the chance to experience first hand the fast paced growth of the area.

During his placement Adam focused on using Sketchup and hand drawing to create storyboards of his design proposals, developing ways to effectively present his ideas.

The more experience I have, the more prepared I will be for the later parts of my degree and for when Im looking for a job after I have graduated.