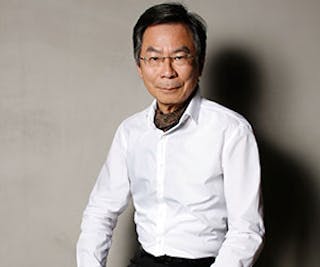 Goh came to the UK from Singapore in 1962 to study for his A Levels. After deciding he wanted to be an architect, he searched for courses through the list of RIBA recognised schools, opting for Birmingham Polytechnic (now Birmingham City University), where he studied the Diploma in Architecture, and then Aston University for BSc (Hons) Architecture.

The course had made me understand that our role, whether as an architect or Member of Parliament, is to make lives better through our design of the built environment."

Following university, Goh registered as an architect in Singapore and Malaysia, starting his practice in 1974. He went on to become President of the Singapore Institute of Architects and was then appointed as a Nominated Member of Parliament by the President of Singapore. He has worked on many large scale projects, including working as Project Director on projects for national embassies and recently as Team Director for the development of the National Heart Centre in Singapore. He continues this work today as part of Ong & Ong Pte Ltd, an 800 person multidisciplinary practice.

He said he found the course to be "refreshing as it encouraged a divergence of ideas and the cross-fertilisation of ideas for design matured our thinking and prepared us to meet the world outside." His time here also encouraged Goh to get involved in community activities, making him more socially conscious, which he believes helped him reach his position as a Member of Parliament in Singapore.

Goh wishes to continue working and sharing his experiences with the next generation. His two daughters are both architects and one of them also studied at Birmingham City University.