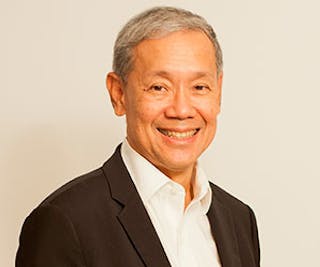 Now Chief Executive Officer of a global architectural practice, Francis Lee first entered the world of architecture in Birmingham and has since been involved in a broad spectrum of projects ranging from retail, hotel, resort, residential and office buildings to large-scale commercial mixed development.

After completing a Diploma in Architecture at Birmingham Polytechnic (now Birmingham City University) in 1978, he returned to Singapore and embarked on his lifelong career at DP Architects, initially working as an architectural assistant before working his way up to sit on the Board of Directors. After becoming an associate architect, in 1983 he had the opportunity to work on the Rahardja Centre, a mixed development with an estimated construction cost of S$800 million (around £400 million). In the same year, he also served as project architect for Wisma Atria, a shopping mall on Singapore's Orchard Road, which opened in 1986.

I have benefitted immensely from my time in Birmingham.

Francis's role as project director for construction of the Dubai Mall - the largest retail complex in the world – in 2003 paved the way for the firm to make a significant impact in the Middle East and in 2005 he set up DP Architects' Dubai office. In 2008, Francis led the Project Management team of the Resorts World Sentosa, an integrated resort comprising a casino, six hotels, retail, a maritime museum, the marine life and water park, within very challenging timelines.

Francis has been instrumental in developing DP from a single architecture entity to a group of related subsidiaries offering integrated and seamless services such as project management, engineering, green and sustainable design, healthcare, infrastructure and master planning. He directs DP's global business growth strategy by guiding their foray into the Middle East, Myanmar, Malaysia and other emerging markets. Under his helm, DP grew from 400 to 1,200 strong and has recently been listed as the World's seventh-largest architectural practice by the World Architecture 100 Magazine for 2012 and 2013.