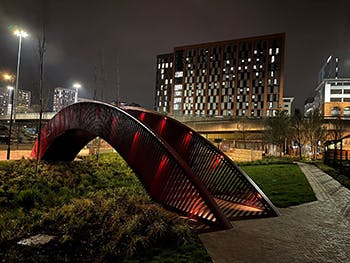 The National Trust, the Canal and River Trust, and a number of local authorities and councils including Birmingham and Solihull were among twelve winners recognised for producing outstanding examples of reimagining landscape, as part of the second annual WMNP International Lecture and Awards.

The 2022 winners represent a broad cross-section of projects, relating to the physical environment, well-being, culture, governance, finance and policy or research that align with the West Midlands National Park, the brainchild of Kathryn Moore, Professor of Landscape Architecture at BCU.

The awards event also saw world-renowned landscape architect, Professor Kongjian Yu, a founder of the Peking University College of Architecture and Landscape, give a keynote speech on protecting and restoring ecological infrastructure.

This second year of the WMNP Awards marks an important milestone in the delivery of the West Midlands National Park. We were impressed by the volume and quality of projects applying for an award and the list of finalists tells a story of creativity and innovation from across the region and beyond. We were delighted that the judges chose the City of Nature for their special award as this project exemplifies many of the core tenets that are embedded in our approach, and we would like to congratulate the project leads and the whole team at Birmingham City Council for delivering such an impressive and far-reaching project.

Professor Kathryn Moore, Director of the WMNP Lab and Professor of Landscape Architecture at BCU

The WMNP Awards programme, launched in 2021, is designed to recognise, celebrate, and share best practice, policy and research and to guide and inspire work that deals with challenges faced by the region that includes the climate emergency, regeneration, environment, transport, identity, infrastructure, employment, skills well-being and understanding how to achieve a resilient green recovery.

Our region is helping to lead the way when it comes to tackling the climate emergency – thanks to our #WM2041 net zero commitment and focus on sustainable forms of economic growth. The West Midlands National Park endeavour is an important contributor to our overall vision of environmental excellence and these WMNP Project Awards demonstrate our desire to move from words to action – showcasing outstanding ways in which we can reimagine landscape. Congratulations to all of the award winners and to the West Midlands National Park team.

Commenting on the awards, Professor Julian Beer, Deputy Vice Chancellor of Birmingham City University said: “As we applaud these outstanding projects from across the region it is important to remember that the ethos reflected in them is founded in a combination of internationally excellent research and fundamental impact in the world of landscape architecture and placemaking more generally.

We are delighted to welcome three world-renowned academics and practitioners as visiting professors to the West Midlands National Park Lab and to Birmingham City University. Their engagement, coupled with the momentum that the West Midlands National Park and these awards now clearly have is a source of great pride for the University and the region.

Announcing the winners, Dame Fiona Reynolds, Chair of the West Midlands National Park Foundation and former Director General of the National Trust said “I am hugely inspired by such a range and number of outstanding projects. These awards are both a testament to all the winners and mark the launch of the West Midlands National Park onto the world stage. Never has such an innovative and visionary approach been so sorely needed”.

Further information on all of the winning projects, including video submissions, is available via the WMNP website: https://wmnplab.org