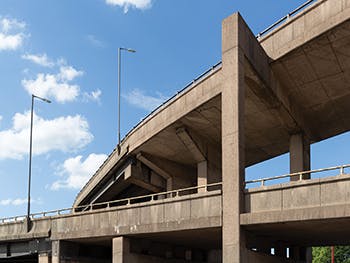 School of Architecture and Design at

Opening to much acclaim and some confusion on Wednesday 24 May 1972, the interchange and Aston Expressway was a major coup for the city, linking the inner ring road and its modernised civic programme with the newly connected national motorway system. It’s much more than just a traffic junction though, it has become part of the cultural landscape of Birmingham.

Following the construction of the M1, M5 and M6, the Midland Links Motorways project was the final piece in a major infrastructure project that aimed to distribute prosperity and opportunity. Conceived at a time when industrial activity was at a peak in the post-war period, the link and interchange were designed to connect the three motorways to one another, and significantly to Birmingham. With greater affluence came greater mobility, and local roads were already struggling to cope with increased commuter traffic as towns and districts to the north attracted suburban dwellers. Together, Gravelly Hill Interchange and Aston Expressway brought Birmingham to national attention and left the Midlander better connected.

Its engineers Sir Owen Williams and Partners had a track record in refined industrial architecture using concrete in the Boots Factory in Nottingham, the Tunnel Cement Reinforced Concrete Laboratories in Thurrock, hangars at Heathrow Airport, and the Express Building in Manchester. Upon its opening, Gravelly Hill Interchange was heralded as a wonder of the modern world, better even than its counterparts in Los Angeles. Architectural critic Reyner Banham wrote that the ”close-packed curving and intersecting perspectives of double files of columns” were unlike any other motorway intersection in the world, offering a ‘tourist route’ for the self-confessed kinaesthetes. Banham provocatively described it as “the first civic rip-off at the expense of the M-way programme” and that it was “just a local Birmingham affair […] a suburban fantasy”, yet exclaimed it as “a big Brummagem artwork”.

The engineering marvel came at some cost to the communities and environment. Some 146 houses were demolished to make way for the 12,655 tons of structural steel and 175,000 tons of concrete that made up the interchange. Beneath ran the redirected River Tame and newly formed lake, two canals, a railway and a major regional gas main. Research undertaken at the time showed a correlation between airborne lead particles and blood lead concentration levels around the road, though this was in an urban environment still blighted by major inner-city industrial sites.

The phenomenon of the multi-lane highway took some getting used to. An ATV story of 1972 reported that pedestrians had been seen crossing the Aston Expressway amongst streams of fast-moving traffic.

The Birmingham Mail produced a three-part “cut-out-and-keep” “special guide for drivers”, advising them to “use your eyes, drive on the signs, and you will untangle Spaghetti without trouble”. Any anxiety about using the junction was allayed by the AA who wrote that “a digital computer will analyse information collected by electronic detectors in the carriageway” to monitor accidents or breakdowns and prevent blockage. The taxonomy of the city had changed, ushering in the new citizen. As Dennis Barker wrote in the Guardian in 1965, “the Midlander […] is sure, without knowing what the way is, that Birmingham is probably leading it.”

This attitude was “famously” captured in the sanitised pseudo-psychedelic film Take Me High (1973) starring Cliff Richard as merchant banker Tim Matthews. The film follows the soul-searching exploits of Matthews who opts for a modernised canal boat and hovercraft for transport in place of the executive suite, cutting between various disconnected locations across Birmingham as contrasting statements on the state of the mid-century British city, with the canal as a folk-tech water/freeway where love and enterprise flourish, a counter to that symbol of modernity, the elevated highway of Spaghetti Junction.

Since its opening fifty years ago, Gravelly Hill Interchange has provoked and inspired ideas about contemporary British society. In 1990, five architects were asked to speculatively reimagine the interchange as “free space” without constraints of planning or brief. Neo-classicist Robert Adam saw opportunity for vertical markers as a point of arrival on the highway, proposing three ornate towers interconnected at high level, taking reference from the classical bridge over the River Tame below. Edward Cullinan occupied the site for three weeks in a portable office to gather opinion and observe the natural habitat in and around the interchange, a sort of activism-lite, proposing pedestrian routes punctuated by picturesque belvederes and small landmarks, with canal-based workshops, along with scrapping the housing nearest to the junction to be replaced by a hotel, ‘a more appropriate building type for the site’.

None of these proposals really fulfilled Banham’s speed fuelled vision of modernity, but Spaghetti Junction has been, and remains, a free space for creative acts. Fine Rats International Under Spaghetti Junction (1993) claimed the space of a graffiti-covered service tunnel through the installation of a kitsch hair dressing salon complete with sinks, mirrors and upholstered seats. Ally Standing and Bruno Grilo’s Land of Green Silences (2016) was named after the garden closest to the junction, revealing this utopian domestic realm. Bill Drummond’s 25 Paintings (beneath Spaghetti Junction) (2014 – 2025), an unasked for ‘major’ public work of art (grid reference 52.509743 North - 1.862424 West), is proposed as a hub for critical works that challenge tribalism, convention, celebrity, nationality and identity.

Gravelly Hill Interchange then has come to represent the multiple identities and imaginations of the city – a world-beating wonder; an assemblage of sculptural forms; a fantastical filmset-like location; a local coup and municipal fanfare; a free space for open dialogue on the state of contemporary society. With the changes brought about by new energy and communication technologies together with the legacy of the global pandemic, the strident modern spirit with which Gravelly Hill Interchange was first conceived can no longer be called upon. Perhaps its cultural calling is its future.