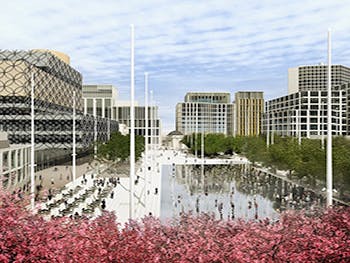 Alessandro Columbano, Senior Lecturer at Birmingham School of Architecture, has teamed up with fellow architect and Senior Lecturer Mike Dring to propose a vision for the redesign of Birmingham’s Centenary Square.

The pair’s alternative interpretation for one of Birmingham’s largest public spaces has since been submitted for the international design competition announced by the Royal Institute of British Architects (RIBA) and the Landscape Institute on behalf of Birmingham City Council.

The winning design by Edinburgh-based practice Graeme Massie Architects was announced on June 17 and picked from a shortlist of five other practices narrowed down from 185 entries from all over the world.

In order to help progress the duo’s bid to question the idea of what public space really means to the citizens of Birmingham, an evening of discussion took place at the new Six Eight Kafe in Millennium Point at the end of May.

Alessandro Columbano said: “It is important that we, as a school, contribute to the debate on the importance of civic space in the city. We wanted to use the competition to attempt an unorthodox approach in reconfiguring Madin’s Central Library across Centenary Square – appropriating ideas of renewed heritage.

“We were pleased to be given the opportunity to talk about our approach in a public event to disseminate the values we promote here at the school.”

As well as designing innovative concepts and maintaining his role as a senior lecturer at the School, Alessandro is the leader of the Collaborative Laboratory initiative (Co.Lab). Mike is also a Programme Director, MArch (Part II) and researcher at Birmingham School of Architecture.

To find out more about the international design competition visit the official RIBA announcement. to keep up to date with news at Birmingham School of Architecture follow us on Twitter and Instagram @BCU_BSoA.

Find out more
about Architecture courses