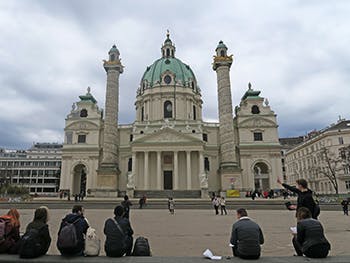 Students from BA (Hons) Landscape Architecture recently had the opportunity to spend some time in Vienna, Austria, to gain an international perspective of everything from the old town, residential parks and even palace gardens.

The itinerary for the three day trip was ambitious, separating each day into different walking routes around Vienna to capture the most of the beautiful city. Students also had the opportunity to explore the city by themselves, or in groups, to find their own inspiration to bring back to their studies.

The first day’s itinerary started with a visit to Vienna’s Old Town, a popular walking destination for visitors. The town centre is a UNESCO world heritage site and includes local attractions, hidden alleyways, cafes, shops and well known film locations such as Orson Welles’ ‘The Third Man’. The tour included a visit to the architect Adolf Loos’ extravagant Public Toilets, built in 1905 originally for a toilet manufacturer and still used to this day.

Students then explored the development at Copa Cargana, a promenade near the Reichbrucke that includes a lively bar and restaurant scene developed in the 1980s. The tour then continued to the landscape around the DC Towers, currently the tallest skyscraper in Vienna designed by French architect Dominique Perrault.

A key element of the day was a visit to the Vorgartenstrasse Residential Park in Vienna’s 2nd district. The park is a new residential area with approximately 1000 apartments being developed in the area of the former Northern Railway Station. Conceived by Karin Standler Landcape Architecture, the area has an amorphous shape for the green areas to ensure the cohesion between the adjacent building lots and architecture. Specific trees are in place and used for zoning, shading and visual protection.

The second day continued the park theme, with students starting the day by visiting the Butggarten Park, part of the area around the Hofburg Palace. The park is surrounded by a butterfly house, a palm house and more. Students then moved on to visit the grounds around the Vienna Secession building, an art movement formed in 1897.  The movement included painters, sculptors, and architects.

A highlight of the day included a visit to the Schonbrunn Palace gardens. Open to the public since around 1779, the park extends nearly a mile from east to west and a further mile from north to south. It was placed together with the palace on the UNESCO list of World Heritage Sites in 1996.

The final day of the whirlwind trip included the opportunity to visit the Gasometers, four former gas tanks built as part of the Vienna municipal gas works between 1896 and 1899. The day also included a trip to the Aspern Seestadt, a new Vienna district which aims to have 20,000 inhabitants and 20,000 jobs by 2025.

It was really good to get some international perspective, especially if you’re working in design. In design, landscape and architecture if you don’t go around and see the world, you’re limiting yourself when it comes to the design process so getting to go somewhere different is great.

“One of the highlights was the hill at the palace, watching the sunset go down across Vienna. From that standpoint you could see how different the skyline is to here.”

The opportunity of an international field trip is an essential element of the course, and gives students perspectives they can then inspire their work once they return.