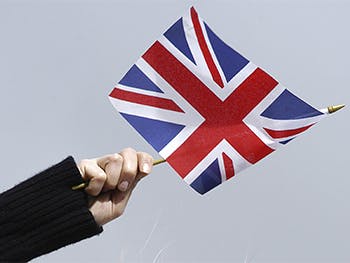 For many, the Brexit vote in June 2016 was an act of patriotism. Defending the nation against the bureaucrats in Brussels and ‘taking back control’ of Britain in order to tackle the issues of immigration and - by default -unemployment.

Just a couple of weeks before the polls opened, Ipsos Mori Political Monitor showed that immigration ranked as the single biggest issue which would affect how the public voted in the referendum.

Patriotism, the love for the nation, is often understood as something inherently positive. How can love be anything else? But critical thinkers such as Sara Ahmed (2004) remind us that patriotism is an ambiguous feeling: it entails a turning towards the nation, to your imagined community, to your kind, but it also requires a turning away from others. Moreover, it means defending the nation against immigrants, refugees and asylum seekers, all those, whose proximity threatens not only to take something away from the nation (jobs, security, wealth), but to take it over and destroy its future.

This kind of talk dominated public discussions before and after the Brexit vote. Alt-right populist Aaron Banks, who funded UKIP’s Brexit campaign with more than £7m, is one such example. Shortly after Westminster attack he tweeted: “We have a huge Islamic problem courtesy of mass immigration (…) we have communities who hate our country and way of life’ (Harris 2017).

Discourses about ‘our’ country, ‘our’ way of life and Others who arguably ‘hate’ it, are laden with emotions and feelings and therefore boundary forming. They mobilise historically familiar and contemporary anxieties about the imagined ‘Other’, while invoking patriotic feelings.

Right-wing populist movements such as the UK Independence Party, The Front National in France, FPO in Austria, and the AfD in Germany know about this powerful potential and use emotionalised homeland-rhetoric to move and motivate potential voters.

Telling examples of this affective strategy are, for instance, Nigel Farage’s unveiling of the ‘breaking point’ poster in 2016. The poster showed a queue of mostly non-white migrants and refugees with the slogan “Breaking point: the EU has failed us all.” Or a 2016 election poster of the AfD that reads: ‘For our country – for our values. Stop the asylum seeker chaos! Secure the borders!’

Protectionism, isolationism, and nativism are the answers of populist leaders such as Donald Trump, Marine Le Pen, Norbert Hoffer, Nigel Farage, and Geert Wilders to complex socio-political questions, and support for them is on the rise. A recent study has revealed that in eight of the twelve countries, almost half of voters – if not more – hold authoritarian populist views. On the top are Romania (82%), Poland (78%) and France (63%), the UK lies with 48% in the middle, before Spain (33%) and Germany (18%) (Twyman 2016).

While some argue that the impact of right-wing populist parties has been exaggerated, they have gained votes and seats in many countries, and entered government coalitions in eleven Western democracies, including in Austria, Italy and Switzerland. Across Europe their average share of the vote in national and European parliamentary elections has more than doubled since the 1960s, from around 5.1% to 13.2%, at the expense of center parties. During the same era, their share of seats has tripled, from 3.8% to 12.8%.

Even in countries without many elected populist representatives, these parties can still exert tremendous ‘blackmail’ pressure on mainstream parties, public discourse, and the policy agenda, as is illustrated by the UKIP’s role in catalyzing the British exit from the European Union, with massive consequences (Inglehart & Norris 2016: 2).

The Centre for Brexit Studies will explore following questions in more detail: