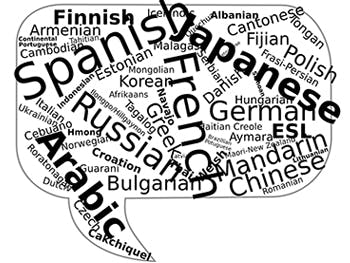 Following Brexit, language has taken centre stage in the national consciousness. Not only is language crucial to how people construct their national identities, it is also a key part of how we develop a sense of belonging and community. Indeed, questions of who is ‘in’ and ‘out’ are, in the minds of many, inextricably linked to how we speak.

As such, different languages and varieties are afforded different social meanings and evaluations, and in the context of Brexit, such discussions take on ever more importance.

Furthermore, the post-Brexit decision has raised a number of fundamental concerns related to language planning and policy, particularly to do with the role of English as a lingua franca. Brexit will undoubtedly change the linguistic landscape of both Britain and the EU, and so there is a growing need to apply linguistic research methods to what is arguably one of the biggest social, cultural and political challenges Europe has faced.

Given the centrality of language in our everyday lives and the way in which it permeates every aspect of what we do, the key focus of this stream is to examine and evaluate a variety of issues related to language use in a post-Brexit climate, both inside and outside the UK, with a view to bridging the gap between analysis and impact. For the purposes of this stream, the analytical focus will include the following areas of enquiry:

While there exists a sizeable body of research on language policy in a European and British context, the arrival of Brexit brings with it a set of new challenges which underpin how Britain moves forward in a global context with regards to language policy and planning. This area of research will investigate the following:

With Britain leaving the EU, what affect will this have on language policy both at home and abroad? What is the future of foreign language learning in the UK and what will be the implications of the Brexit decision for how foreign languages are taught in UK schools and universities? What kind of political and legal protections will be offered to regional and minority languages? What are the lingua-political implications of the Brexit vote in terms of language planning and policy?

2) The role of English in the EU

English has enjoyed a central role as the de facto language of Europe for decades, but the Brexit vote has dramatically changed the landscape and English now faces a challenge to its linguistic domination. This area of research will investigate the following:

Can English maintain its privileged position as the language of European trade, commerce, law and politics, or will it instead lose its place as a lingua franca of Europe (or arguably the lingua franca of Europe)?What might a ‘post-English’ Europe look like and what are the implications of this in terms of access to legal rights, trade, employment, and commerce? How will other nation states respond to the changing linguistic landscape of a post-Brexit context? What will be the implications for the education systems in the remaining EU countries, especially in relation to English as language of instruction in HE institutions, well-established Content and Language Integrated Learning programmes in primary and secondary schools, or general classes of English as a Foreign Language?

The Brexit vote focused people’s attention on language as a marker of national identity, with assumptions about ‘Britishness’ often associated with language use, as well as accent and dialect features. This area of research will investigate the following:

What role does language play in communicating national identity, and how will this change in response to a political environment where nationalism appears to be on the rise? What kinds of linguistic strategies are used by members of the public to reify their national identity and how are such strategies used in online and offline spaces? How is patriotism discursively constructed? How is language used to marginalise, stigmatise and otherwise discriminate others, and what kinds of new linguistic ideologies are being constructed in a post-Brexit society? How was the term ‘Brexit’ talked about by politicians and the press before and after the vote?

Although the UK is a linguistically diverse nation, both in terms of the different varieties of English used and the number of languages spoken, the Brexit decision has focused people’s attention on the link between speech, national identity and belonging. Relatedly, there has been a rise in reports of foreign language speakers refusing to use their national language in public places for fear of violence, exclusion and personal attacks. As such, Brexit has had a significant effect on the public life of languages, an effect that will likely continue as we draw closer to full withdrawal from the EU. This area of research will investigate the following:

Language underpins many of the analytical streams in the Centre, so there exists the potential for productive research collaborations with scholars investigating other elements of Brexit. As such, researchers working in this stream would be happy to discuss bringing together their expertise in applied linguistics, corpus linguistics, forensic linguistics and sociolinguistics with approaches, frameworks and research questions in other fields.