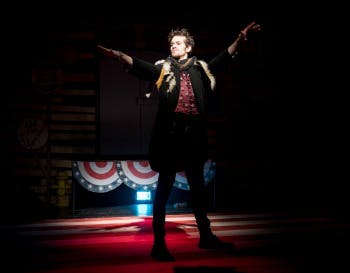 Well, this is a difficult question. If I’m being honest not really. Drama school training is incredibly intense, and all you can really do to prepare is make sure you can handle it. They, and by ‘they’ I mean the staff, have an infallible way of detecting whether you ready for the intense emotional and physical rigour of the course. So I personally waited 3 years before even auditioning. I attended a kind of intense foundation course called ‘Year Out Drama’ in Stratford-upon-Avon, which allowed me to grow my repertoire and understanding of myself as an instrument, and I also learnt how to cook. What drama school did teach me was a new perspective, an ability to look at what I already know, and it have a different meaning. Some things that I thought I knew where falsehoods, and likewise in reverse. Perhaps the one thing I wish I'd known is that after drama school I would not working towards a job, a role, a character, or even a film, when I graduate or even just before; I’m working towards a career.

I remember finding out I’d got in whilst celebrating the opening night of 'Merchant of Venice' at the RSC with the cast. We were all doing shots and I shouted ‘I'm going to be an actor! They're going to fix me’. Patsy Ferran who was playing Portia suddenly grabbed me and said ‘drama school doesn't change you, it distills you’, I thought ‘nope, she clearly doesn’t know me very well’. I’m not going to go into why I thought that, as I’m sure a list of self-analysis is indulgent, but I can tell you 100% that she was right. There was a definite cloud of ignorance in my mind to how drama school could turn me into an actor, and how it could fulfil the image of myself that was ‘the actor’. The thing is, we are all actors. As Mark Rylance said in his BAFTA Fellowship acceptance speech, ‘we are a nation of story tellers’. The scariest thing that drama school taught me is that I already had all the skills, I just need to relax and let them out. So no, it hasn't changed me at all, I am however, more experienced, much more relaxed, and feel more ‘me’.

Has it been what you expected, or quite different?

Being the imaginative sort, I thought about the training quite a bit before I started. Picturing everything going perfectly, suddenly feeling capable of anything, and that I’d be the sort to only find it fun. I ignored the stories of it being stressful and ‘favouritism’, and predicted them to give me all the answers. After completing it, and bear in mind this is just my personal experience at RBC, it was incredible, but absolutely nothing how I’d imagined.

I often liken it to ‘Jedi training’, or Hogwarts. It provides a plethora of skills in first year and raised self-awareness - the Jedi rhetoric had manifested itself in my mind already by the end of the year; ‘keep open, awareness of oneself, and keep on the path’. The second goes onto the application of those skills as I became a Padawan, and in some places the hardest year overall. I experienced a lot of failure, and trying things out, which would often result in an unsatisfied mindset. Finally, in third year, I became a Jedi, and I suppose though ‘missions’ or full scale theatre productions, I developed my own sense of acting and the way I performed with an audience.

I expected to be given all the answers to my life, my direction, and how to be an actor. This is not what I got, but instead, gained much more. Yes it did provide some answers, but moreover asked new questions; and the comfort of understanding that I didn’t need to know everything yet. It’s a practical course of course and actually failure is a huge part of one's journey through art. It’s given me the skills to achieve a career in Acting. A teacher here once told me, “drama school doesn't make actors, it teaches you how to act. You have to become the actor”.

What have been the most valuable skills you’ve learnt and you’ll take into your career?

That not everything is my fault, I can’t fix everything, and don’t allow other's insecurities to affect my success. I think many skills within acting are just physical abilities, or tricks that many of us have already, or may learn through hard work. The skills that I appreciate most through my training is the insight from my lecturers/tutors on how to be a person. So many things held me back and it was actually this mindset that I had to deal with. I have transferred them into my professional work (including non-acting work) and felt more confident and happy with myself immediately. My relationships with other people have improved, and I feel more in control of myself whilst releasing the ‘controlling nature’ I used to have. I am of course, still working on the latter point.

So you’re in a race right? To get into drama school you feel like you’ve got to be the fastest, or most attractive, or best actor ever. You think you’re alone, against the world. You get in, or pass the finishing line, look around and realise everyone’s just finished with you…and it isn’t the finish. You’re all bundled into a room and told ‘Welcome to the drama school, you are one company for 3 years’. And you are; you live, breathe, sweat, and laugh together, maybe cry now and then, but it becomes your family.

I remember thinking I’ll never get to spend this much time surrounded by incredibly talented and like-minded people. But Actors generally operate within companies or independently, and it’s a constant flow of joining and leaving; taking on and releasing. I always had this in the back of my mind, and I loved committing my time to fellow class mates, knowing that sadly one day I’d leave and move on, carrying their stories with me. I might be lucky enough to work with people from my year in the future, and I will keep links with as many as possible. Thanks to social media today it is so easy to keep in touch, and it's beautiful to see how we’re all getting on already.

I have so many memories and experiences from it’s really hard to pick one. I have honestly loved it all. But if I had to narrow it down, I’d have to say there is one I adored for different reasons. It was the first production of 3rd year, when I played Henry Clay/Black Fox in 'Bloody Bloody Andrew Jackson'. I enjoyed it not least because it was a musical, but I was able to work with Stephen Simms as my Director, and he was breathtaking. Every day I wanted to get in early, he would support my decisions or challenge me to be more. I am indebted to him and Daniele (the course director) for so much. The material was my sense of humour and the characters seemed written for me. I felt truly professional throughout. Also the lead was a close friend of mine and he smashed it, I remember feeling so safe with every member of the cast, it was a very special experience.

Ha. Well apart from the above? ‘Rhinoceros’ was the biggest challenge I’ve had in my life. But I think something I’ve found also challenging is the constancy of working on everything. Nothing is a one-tick box, and I have ADD, which means I love control and organising things into boxes, ticking them off like a big to-do list. Training is more like an introduction to a school of thought and it’s a constant work load that turns into a freedom of self-expression.

So, actually, I think what I found challenging is learning that not everything is as it seems, some things don’t need over complicating, and never give up. That last one was probably the biggest. In the latest play I’m doing (with the MFA course) a beautiful quote. “A man may achieve anything he wants in life, and often does, as long as he doesn’t give up wanting it”.

What would you say to someone starting drama school?

Good luck! Remember it’s a school of thought as much as a school or art. If you don’t know the answer, it’s okay, you don't need to, and you might not know the question, so just wait until it clicks. The penny will always drop, especially when it feels like it never will. It’s an uphill climb for most of it; something that my course director said that always stayed with me: ‘You wouldn't need to go to school if you already knew it, it’s going to be doing what you don't like, for three years.’

Well, the Head of the MFA course has asked me be in one of their plays, so straight away I’m in 'Waste' by Harley Granville Barker. This summer, a friend of mine from California has written and produced a show and we’ve wanted to work together for so long now, so that’s refreshing – the project is called 'A Night of Glass' at Edinburgh Fringe. After that, I’ll be working my day job to pay rent, but I’ve got a friend who owns and runs his own Pantomime company, I’d love to be involved in that next. I don’t feel rushed or the desire to push for anything, it’s a slow build, and I want to make sure it’s solid.

I’ve been so lucky. I've met some incredibly generous people along the way, who have gifted me their time and skills. The people are what makes life interesting for me, and it’s what makes RBC simply divine. Their patience and will for you to succeed means you feel very safe, understood, and supported; especially when the training might make you feel a bit lost. Also, because we’re not in London everybody has the time to afford to give you that little bit extra. I was able to learn at my own pace. So I guess my lasting memory is the staff...now I want to get into a play for them to be proud of.