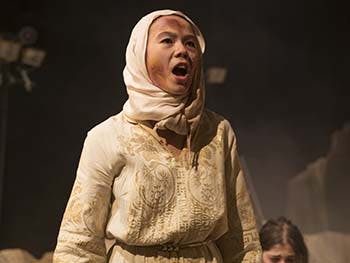 That's a tough question, but probably the fact that no one can really prepare you for when you leave drama school and what the future holds. It's a subject that always comes up before and during the three years at drama school, but it’s only when you're leaving (like I am now) do you realise that it's a pretty challenging industry to crack!

Drama school isn’t about teaching you how to act, (we can all act and that's why we've been accepted in the first place), it shows you how to adapt, how to be mentally and physically fit, how to be a working actor in the future, and most importantly, builds up your confidence and presence.

I've definitely changed a lot throughout the three years. I used to just take the back seat during classes or rehearsals and I always felt a bit hesitant when it came to trying out new things or speaking up in class, whereas now I'm more confident not only as a person, but as an actor as well. I take more risks and try to take the role of the leader more often because when you step into the industry no one is going to spoon feed you anymore. I know that I have to take the lead and just go for it.

Has it been what you expected, or quite different?

I think because I also did the Foundation course at Royal Birmingham Conservatoire, I sort of knew what to expect for the following three years. It's definitely what I expected and much more. I've learnt so much about being an actor and the stamina it requires, but also the amount of mixed emotions you can have in a single day! I guess what I didn't expect is the amount I learnt about myself over the three years. You think you know yourself but you actually don't until you've been to drama school!

What have been the most valuable skills you’ve learnt and you’ll take into your career?

Taking the lead and making bold and strong decisions are definitely the most valuable skills I'll take into my career. I've learnt to take ownership of the characters I've been given and make definite choices about them. No one cares if you've made the wrong choice, it's better to be strong and wrong, than not offer anything at all. Being a humble actor is another important one. No one wants to work with an arrogant, cocky actor, so why be one?

For sure! I've made some friends that are going to last a lifetime, which I am so grateful for. We've all been through thick and thin together. Even if they tried to get rid of me I'll still be sticking around!

My highlight of the three years has to be the amazing opportunity I was given to play the Young Woman (Helen) in Machinal in my first third year production. Going from being the shy me to playing the lead in a show was a massive jump, but I took on the amazing role with a very supportive cast and director and felt like I did myself and the company proud, which is the most important thing! I'd definitely do it again if I got the chance!

For me personally, letting go emotionally was a massive challenge throughout my training. I think our Course Director, Daniele, knew this so she pushed me to get over this problem of mine, which I will be forever grateful for. She put me in roles where I wouldn't necessarily be comfortable, but were essential for me to to push myself past my limits in order to be the actor I am now.

What would you say to someone starting drama school?

Just have fun, don't stress and enjoy it as much as you can! I know it's a cliché to say that time flies, but trust me, TIME FLIES! So don't waste your time stressing over small things, or worrying about the future so much, just enjoy each day as it comes because before you know it you'll be handing in your business plans and preparing yourself for the real world!

During the summer I'll be working with Yellow Theatre and Moongate Co-Production at the Arcola Theatre, which I'm very excited about, as it gives me the chance to work with some well-established British East Asian actors, directors and playwrights, such as Daniel York Loh.

Running around the corridors singing at the top of my lungs, doing the Hakka on the grass outside Millennium Point, tanning with the girls during lunch break, going to the zoo during second year for animal studies... the list is never ending! There are so many amazing memories that I will cherish forever.