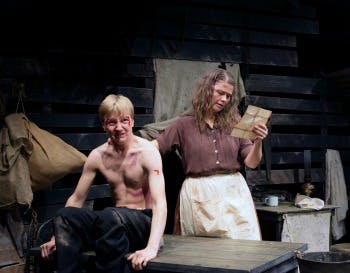 Drama school will not make you an actor. The Conservatoire will offer you tools and opportunities in the form of training technique and building a healthy balance of pride and modesty, but you must push your own learning.

Remember: You got in - The tutors believe in you, and so should you!

Massively in some ways, but in others not at all. The biggest shift in me has been in my perspective and attitude, on acting and in life. I used to frown upon peers who I believed were arrogant or outspoken, people who relished the limelight. But after a while I sort of just realised that they weren't any of these things at all. They were just enjoying themselves, and they're right to do so, as we all should! I learned that pride isn't a bad thing and that confidence is healthy...I doubt I would have learnt this anywhere else.

Has it been pretty much what you expected, or quite different?

Very different, didn't have a clue what I was getting into to be honest but as soon as I arrived and met the staff I was relieved. One thing I was right about was that there was something magical about the whole process, and that still hasn't changed.

What have been the most valuable skills you’ve learnt that you’ll take into your career?

You're constantly getting whisked up into groups big or small, sometimes for an hour, sometimes ten weeks and one big one for three years. You're all set an objective as a collective: to perform. Somehow by the time the metaphorical (or literal) curtain comes up, you must perform.

It sounds obvious but it's easy to lose track of this objective or make your own up; do this and you're bound to wind up unhappy. It is a skill to find ways to enjoy challenging work, to welcome your peers and to be open to the tutor's thoughts. I find that trying to go against this impulse feels unnatural, as it should because it's so important.

Yes - professionally, socially and I'll likely be living with some this year. Throughout the course you feel obliged to be friendly but it’s actually quite liberating to not have that obligation, yet still want to see them!

Hands down the most fun I had was performing 'The Hostage', that show was an absolute blast. The whole play was set in a grotty Irish brothel. There was a plot but it was loose enough for us to squeeze in a brief conga, lots of toilet humour and a transvestite strip tease. I had the pleasure of playing a massive idiot with a small bladder. It was a real feel-good play with a warm yet sobering message.

My first performance of my third year, in 'Holy Day', and the moment a tutor described as when "the penny finally dropped". Without going into too many details, (read it!) the narrative tells a dark trauma for my character so I had to present a depth of vulnerability - it's safe to say I didn't invite my parents to this one!

Referring back to my previous attitude on exposure, I was not comfortable doing this at first. Far too much honesty was involved in the work, so throughout rehearsals I was reluctant but eventually I became comfortable releasing some more expression and truth.

During the bows of our first show, I have a distinct memory of truly feeling proud of my work for the first time. I've been attempting to carry this attitude towards my work across every other show since.

Is there any advice you would give someone just starting drama school?

You are about to be presented a grand opportunity.

You will fail but make sure to fail spectacularly - struggle with the problems, don't run away from them.

I’m going to pursue my acting career whilst developing my photography business.

The audition for the Sam Wanamaker competition. It’s been my favourite moment on stage and I've been trying to work out how to recapture that ever since.