Birmingham - trained talent on TV in 2022 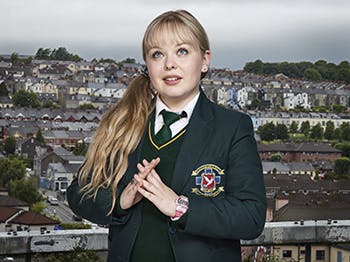 With the Covid-19 pandemic having wreaked havoc on television production schedules, in 2022 we’re set to see some top-notch new TV shows grace our screens as well as fan-favourites returning.

This year we can look forward to a bunch of Birmingham City University graduates popping up on telly, as well as many working behind the scenes. Here’s what some alumni are up to and the programmes you might want to add to your TV planner

Nicola graduated from Birmingham City University’s School of Acting – now part of Royal Birmingham Conservatoire - in 2011 and in March we’ll see her back on our screens playing the lovelorn Penelope Featherington in the second series of Netflix’s popular period drama Bridgerton.

Nicola also recently bid an emotional farewell to Channel 4 comedy series Derry Girls in which she plays the role of goodie-two-shoes Clare Devlin, as filming of the final series came to an end. Ahead of new episodes due to air in 2022, Nicola wrote “Goodbye Derry Girls, it’s been quite a ride”, in an social media post sharing a Polaroid picture of her on set.

Derry Girls follows a group of Northern Irish teens growing up during The Troubles and has received huge critical acclaim, becoming the most-watched TV series in Northern Ireland since modern records began in 2002.

Crime drama The Rising was filmed in the Lake District and is to air on Sky this year. The supernatural thriller series stars Robyn Cara, who studied Acting at BCU and graduated in 2016. 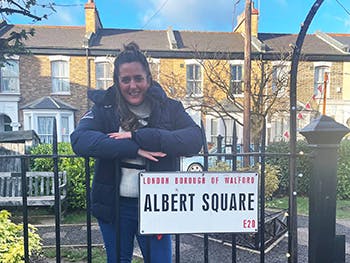 Claire is Senior Script Editor on popular BBC TV soap EastEnders, which sees her developing story ideas and working with writers. “My role involves overseeing all of our script editors, researchers and trainees and working on all the scripts for EastEnders to make sure that they are the best they can be,” explained Claire. “I also act as a point of contact across all of our departments to make sure we can shoot what is written.”

Claire studied Media and Communication and graduated from the University in 2008.

The UK’s biggest medical series, 24 Hours in A&E, has moved location and is now being filmed at Queen’s Medical Centre, Nottingham – one of the busiest Major Trauma Centre in the country.

School of Media graduate Elvinah Xhignesse has been working as a Production Assistant and Series Researcher on the Channel 4 programme, supporting the editing of episodes and ensuring they’re ready for broadcasting.

“The new series is due to air in Autumn and is particularly exciting as it’ll be the first series shot out of London and we’ve been able to film so many great and heart-warming patient stories,” said Elvinah, who studied Media and Communication before also completing her postgraduate Media Production qualification at BCU in 2021.

Elvinah also recently worked as a Runner on the second series of BBC craft show ‘All That Glitters’ – airing soon and filmed at Birmingham City University’s School of Jewellery. 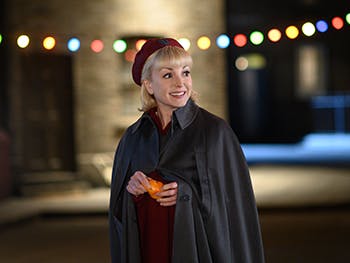 Helen is best known for playing Nurse Trixie Franklin in BBC drama Call The Midwife and has appeared in the series for more than ten years since graduating from in 2003.

Series 11 is currently airing on Sundays at 8pm on BBC One.

Airing on Amazon Prime Video in September, Lord of the Rings is set during the Second Age and precedes J.R.R. Tolkien's book trilogy. Birmingham City University Chancellor, Sir Lenny Henry, stars in the series and plays the role of a Harfoot – a black hobbit.

Sir Lenny Henry will also appear in BBC drama My Name is Leon this year, which follows the story of a young boy who has been taken into care and is on a mission to bring his family back together.