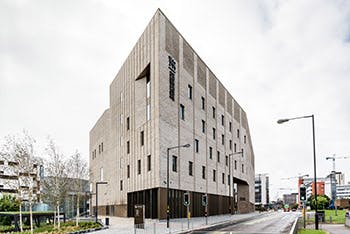 The first digital conservatoire of the 21st Century, Royal Birmingham Conservatoire, has been granted the ‘Design through Innovation’ award by the Royal Institution of Chartered Surveyors (RICS) at its annual list of national honours.

At a ceremony held at The Brewery in London on Friday 3 November, and hosted by ITV news anchor, Nina Hossain, Royal Birmingham Conservatoire secured the award above 12 other regional ‘Design through Innovation’ award winners. These included the Aerospace Integration Research Centre at Cranfield University, Urban Sciences Building in Newcastle, Omagh Hospital and Primary Care Complex and The Active Classroom in Swansea.

The RICS Awards Grand Final celebrates the UK’s most inspirational initiatives in the land, property and construction sectors that are having a significant positive impact on the communities they serve.

RICS judges praised project managers Faithful+Gould, architects Feilden Clegg Bradley, constructors Galliford Try and Birmingham City University for delivering this ‘world class’ facility with national and international appeal, which will attract further investment to the city. They also said that, although it had stiff competition from other entries, in many ways it stood ‘head and shoulders’ above other entries.

“I am delighted that our ambitious project has been recognised at a national level. In enabling our students to be the best musician they possibly can be, it was imperative that we created world-class facilities to nurture the next generation of great performers.

Our new home is already providing rich dividends for the entire West Midlands region, while, at a more local level, it is a fantastic hub for the Eastside community in Birmingham.

The historic Conservatoire’s state-of-the-art building is the first purpose-built music college to be constructed in the UK since 1987 and the only one in the country which has been specifically designed to cater for the demands of the digital age.

The RICS Award comes in the same week Royal Birmingham Conservatoire was named Construction Project of the Year at the Insider West Midlands Property Awards. The University’s new £31 education hub – Curzon B – was also Highly Commended in the same category at the event, held at Hilton Birmingham Metropole on Thursday 1 November.

Ahead of the Grand Final, Royal Birmingham Conservatoire had already been named ‘West Midlands Project of the Year’ and secured the ‘Design through Innovation’ award at the regional RICS Awards West Midlands in May.